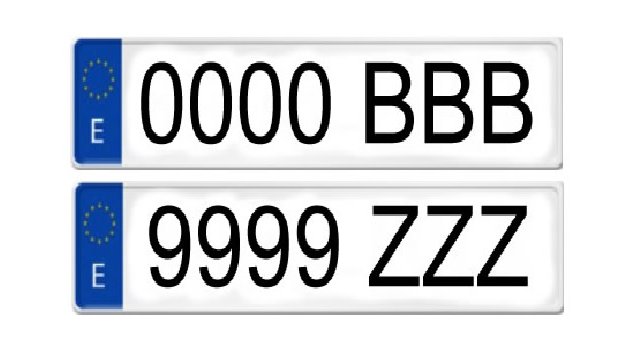 Number plates on vehicles are the basic identification method used to locate that particular vehicle, allowing for the identification of its owner, and all information relevant to its registration, but, did you know that in Spain there are nine specific letters of the alphabet that are prohibited from use in number plates?

In 2000, Spain had to change its numbering system on vehicle plates, to fall into line with the rest of the EU countries, and as a result, replaced the previous system of province initials with the modern plates featuring the European flag, followed by four numbers and three letters, with the letter ‘E’ for Spain (España).

The General Traffic Directorate (DGT) – the government department that is responsible for the Spanish road transport network – explains the system in its magazine, that 80 million different number plate registrations can be made up out of using the first four numbers on a plate.

Their magazine says, “Starting with 0000, up to 9999, we find up to 10,000 different combinations with these four-digit numbers. In this way, it is expected that until 40 years from now it will not be necessary to return to the starting number or change the system”.

There is no problem whatsoever with using the numbers, but, the problem arises when the letters are included, with plates starting out at BBB and going up to ZZZ, but the DGT has avoided the use of vowels for fear of inventing abusive combinations of three-letter words, acronyms, or even a person’s name (ANA, EVA, etc), and the Spanish alphabet letters LL and CH are not used either.

Added to the list of prohibited letters are, “Ñ, for fear of it being confused with the regular N, nor the Q, due to possible confusion with the O and the number 0”, explains the DGT magazine, which results in A, CH, E, I, LL, Ñ, O, Q, and U all being omitted from use.