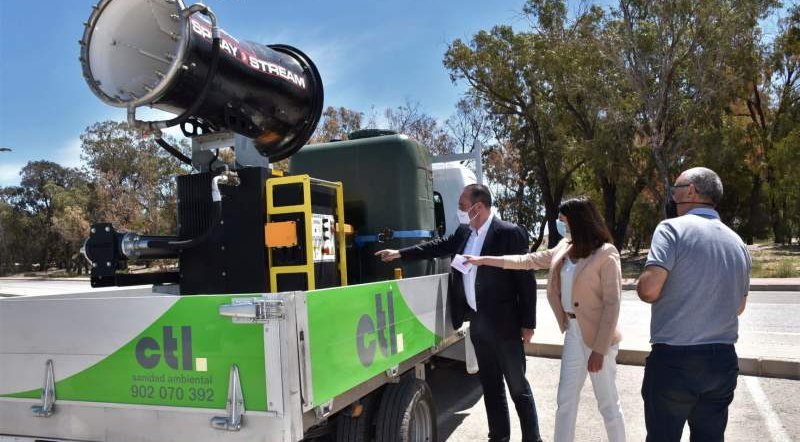 All-out war A FUMIGATION team equipped with a long-range nebuliser cannon, three spray guns, a zodiac dinghy, motorcycle, a quad bike and a drone will scour Elche to eliminate plagues of mosquitoes in hard-to-access zones.
Cheap choice SOLAR energy companies are going inland to the Medio and Alto Vinalopo in search of dry, sunny, flat and cheap land near to power stations to keep construction costs as low as possible.
Open days ROJALES town hall is holding open days until May 22 enabling members of public t0 visit the 18th century windmill, which cost €39,000 to restore, as well as other museums inside the municipality.
No permit ELCHE city hall ordered the closure of a bar terrace in Altabix following a complaint from a neighbour who maintained that it lacked a licence.  Her suspicions were later later confirmed by the Policia Local who found that the owner did not have a permit for outside activity.
Tourist influx FOUR THOUSAND police officers were deployed along the Costa Blanca over the first weekend of full mobility between regions.  By Friday evening traffic leaving Madrid had increased by 42 per cent as Alicante province’s Policia Nacional, Guardia Civil and Policia Local forces prepared for 200,000 short-stay tourists.
Pedal away ORIHUELA will have a network of bicycle lanes connecting outlying districts with the centre. Although it will be financed by the Diputacion provincial council, city hall has already awarded the contract for a 3.5-kilometre lane linking Orihuela and Montepinar as far as the roundabout on the old CV-870.
New offices TORREVIEJA town hall is providing the Agamed water company with municipal land to build new offices, according to Spanish media reports.  Until now Agamed, in which the town hall has a 24 per cent holding, has paid an annual rent of €100,000 for its Caballero de Rodas offices.
Port centre ALICANTE port will have a €200,000 reception centre run by the Red Cross for irregular immigrants arriving by boat from North Africa.  Although discussed in the past, the Covid pandemic and the need to carry out immediate PCR tests brought the initiative forward, the central government’s sub-delegate explained.
Hot stuff LAST Sunday, May 16, the temperature rose to 37.8 degrees in Elche, which made it the city’s second-hottest day in the month of May for the last 120 years, Spain’s Met office Aemet confirmed.  It was also the highest temperature registered anywhere in Spain so far this year.

The Euro Weekly News is running a campaign to help reunite in Spain with their family and friends by capping the cost of PCR tests for travel. Please help us to urge the UK government to cap the costs.