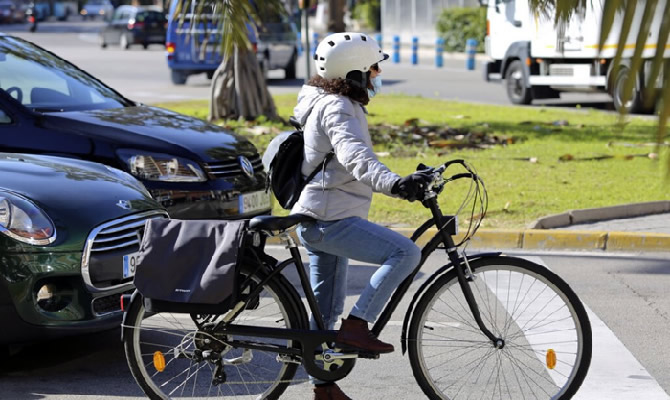 PRESIDENT Of RACC Says That He Wants All Cyclists To Undergo Mandatory Training Before Being Allowed On The Roads.

Josep Mateu, the president of the RACC, presentation of the third RACC Urban Cyclist Barometer in Barcelona, has raised the issue of whether people might soon need to take some sort of test before they are allowed to ride a bicycle in the streets.

Mr Mateu said he thought that there was definitely the need to promote training and knowledge of urban traffic regulations among cyclists and scooter users, and has proposed the creation of a ‘titulin’ or compulsory card which certifies the rider has at least basic knowledge and skills.

He stated the results of a report that had been compiled from a survey that had been conducted, which showed that 38 per cent of cyclists admitted to having no knowledge of the traffic regulations and that even when it is prohibited, 36 per cent still used some type of headphones while cycling, and 24 per cent admitted to using their mobile phones.

The RACC president continued, “We believe that we need more training in urban traffic regulations. Not in regulations only for cyclists, but also, since we coexist with all other means, more training in urban traffic”, and went on to explain that he intends to communicate his proposal to the General Directorate of Traffic (DGT), Barcelona Town Hall, and the Catalan Traffic Service, as reported by diariodesevilla.es.

He also pointed out that at the moment the world of bicycles is very reluctant to make helmets, insurance, or registration mandatory, but says he believes a minimum knowledge should be mandatory, saying, “We ask that this training be done, which could end up in a licence or not, but we do ask for this type of training to be able to circulate in the city.”

Adding, “it seems strange that a moped that goes at low speed has to have a licence, while scooters and electric bicycles, which can also reach relatively high speeds, do not have the need to meet any standard.”