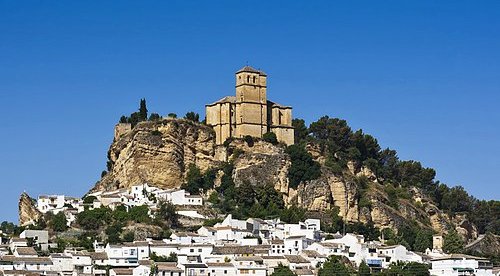 Prosecutor's Office Of The Supreme Court Agrees To Close Off Town In Granada. image: Wikipedia

Prosecutor’s Office Of The Supreme Court Agrees To Close Off Town In Granada.
The Prosecutor’s Office of the Supreme Court has agreed with the Junta de Andalucía and has annulled the decision of the Superior Court of Justice of Andalucía (TSJA), which on two occasions rejected the perimeter closure of the Granada municipality of Montefrío for not considering it “justified” nor “proportionate”, despite having an incidence rate of over 2,000 cases per 100,000 inhabitants.
The Prosecutor’s Office now agrees with the “necessary” and “ideal” measure to fulfill the health objective pursued by the Andalucían Government and asked the Contentious-Administrative Chamber of the Supreme Court to roll back the proceedings to the moment immediately after the presentation of the allegations to the Public Prosecutor’s Office were made the first time.
These issues were not addressed by the Chamber initially who decided against the restrictions without first hearing the criteria of the Public Ministry. i.e. the incidence rate.
It should be remembered that the TSJA has endorsed the perimeter closures of other municipalities such as  Castro del Río (Córdoba) , La Campana (Seville) , Bornos (Cádiz) or Villamartín (Cádiz) . The president of the TSJA recently regretted the disparity of  the court’s criteria, but pointed out to The Government of Pedro Sánchez: “They have forced us to manage the pandemic and that’s what they (the new laws) are for.”

The government approved a decree in May of this year allowing the Supreme Court to reach a consensus on these cases in a shorter time frame than usual. For this to happen, public prosecutors or regional governments will have to appeal rulings from their territorial courts. The justice minister, Juan Carlos Campo, has announced that if the top court’s rulings show that there is a “need to make additional legal changes, these will be studied and proposed in parliament.”

Campo also points out that “regional governments always have the possibility of requesting [from the central government] a state of alarm for their territories, with the scope that they deem necessary.”

The state of alarm ended in Spain at 12 am on Sunday morning May 9. Despite restrictions remaining in place, the lapse of the emergency situation saw thousands of Spaniards take to the streets that night, to celebrate and party. The end of the restrictions also meant that in parts of Spain nighttime venues with music licenses could reopen, albeit with dance floors remaining closed for now.