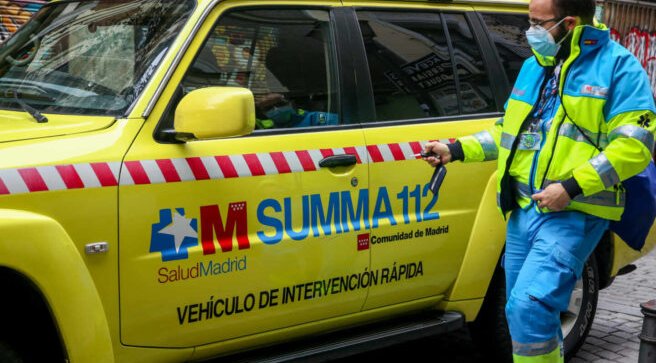 A man in his 30s died early this morning, Tuesday, May 18, after being found lying on the ground in Puerto Navacerrada street, in the Madrid district of Puente de Vallecas. The man was discovered to be in cardiorespiratory arrest, having suffered two stab wounds, according to Emergencias Madrid.

The event took place minutes after midnight, according to SAMUR-Civil Protection personnel who came to the scene after receiving a call from the young man lying at the door of number 20, Puerto de Navacerrada street.

After searching him, the man was found not to be carrying any documents or means of identification, although the doctors on scene calculated that he would be about 30 years old and said that the two stab wounds, one in the right hemithorax and the other in the left armpit, were likely to be the cause of death.

After performing cardiopulmonary resuscitation maneuvers for more than half an hour, SAMUR-Civil Protection confirmed the death of the man. The National Police, who also appeared at the scene, immediately opened an investigation into the incident. source: 20minutos.

Thousands In Madrid Protest In Support Of Palestine

THOUSANDS of people took part in a protest in Madrid on Saturday, May 15, in support of Palestine following six days of conflict with Israel. According to Reuters, the association of the Spanish-Palestinian Community held the Jerusalem rally to commemorate the 73rd anniversary of the 1948 Nakba when many Palestinians were forced out of their homes in the fighting around Israel’s creation.