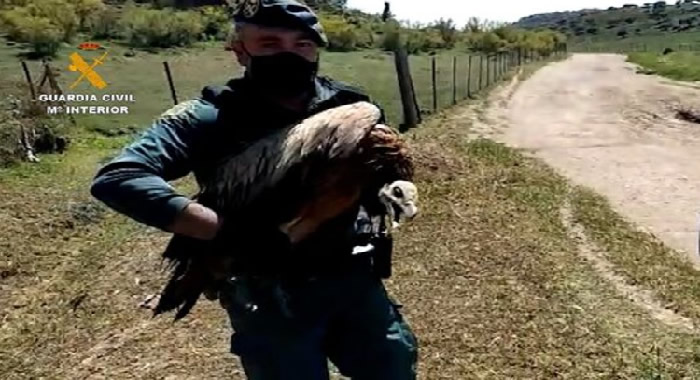 Officers of the Guardia Civil’s Seprona unit in Morón de la Frontera have rescued and saved the life of a griffon vulture that they had found stunned and suffering from dehydration and unable to fly.

A statement from the police said that the search for the glorious bird of prey was initiated after calls from several concerned members of the public at around 4pm in the afternoon, reporting sighting the adult bird in the Camino de los Recoberos area of Morón, which was clearly having problems while flying above them.

Quickly locating the spot where the bird had been spotted falling to the ground, the Seprona officers found him barely able to move, showing obvious signs of dehydration and malnutrition, as well as having a significant infection of parasites, as reported by diariodesevilla.es.

The Sevilla Seprona officers transferred the poorly bird to the animal deposit set up by Morón Town Hall at the Local Police facility where they supplied him with water, thankfully, immediately reviving him, and watched over him until members of CREA (Centre for the Recovery of Threats Species) collected the bird of prey later that same afternoon.

Griffon vultures are large Old World birds of prey, belonging to the Accipitridae family, also known as the Eurasian griffon, and Spain has the biggest colony of Griffon vultures in all of Europe, located at the Hoces del Río Duratón Natural Park in the province of Segovia.