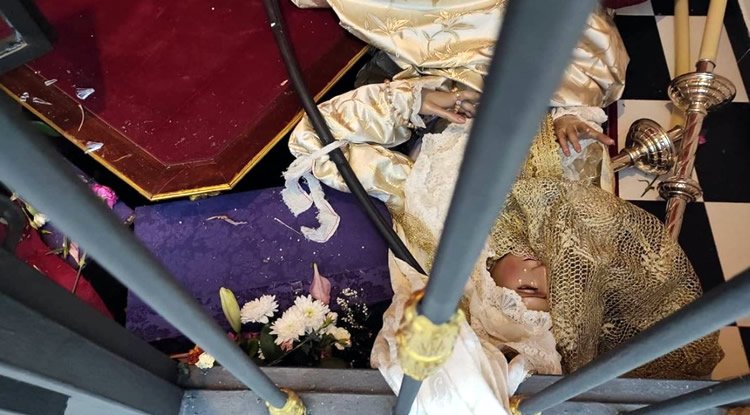 The Virgen De La Encarnación chapel, located in the Dos Hermanas neighbourhood of Malaga has suffered a terrible and disgraceful desecration during the early hours of Tuesday morning (May 18).

According to Remedios Sánchez, the association’s older sister, it is thought the thieves forced their way into the chapel sometime between the hours of 4am and 5am, stealing the Virgin’s crown, dagger, handkerchief, and a brooch, and at this moment it is not known if anything else was taken, or if the image of the Virgin has suffered great damage.

The image of the Virgin was discovered on the floor this morning by the faithful, among other items scattered all over the floor, and the investigating forensic police officers at the scene have reportedly told the association that they believe the thieves had planned the crime in advance, as the sister said, “It was through some windows, they didn’t even come in, they pulled the carpet and threw the image on the floor”.

Just this past lent, the Virgin’s trousseau had been restored by Enrique Salvo, and the thieves had stolen the various items by pushing the image onto the floor to extract them, with Ms Sánchez commenting, “We are waiting for what the police tell us to raise the image, observe the damage and check if the thieves have taken anything else”.

No official complaint has been made to the police yet, as they wait to find out the extent of the damage done to the image of the Virgin, but understandably, the association say they feel “dismayed, destroyed and speechless” at this terrible act as vandals desecrate a place of worship.

Police sources have confirmed to La Opinión De Malaga that the main door to the Dos Hermanas chapel had been forced, and that several items and jewels had been stolen, but that they are still waiting for the association of the faithful to file a complaint to begin the investigation.