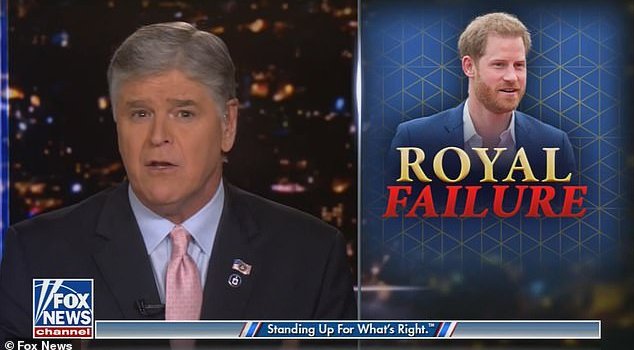 “I don’t want to start going down the First Amendment route because that’s a huge subject and one which I don’t understand because I’ve only been here a short time. But, you can find a loophole in anything. You can capitalise or exploit what’s not said rather than uphold what is said.” he added.

This came after The Duke of Sussex made his controversial comments in an Armchair Expert Podcast episode with Dax Shepard on Thursday. “I understand it to some extent, so I have a lot to say about the First Amendment, but it’s ridiculous,” Harry said.

Hannity blew up at Harry in the show on Monday, May 17, as “the right royal pain of a **” then proceeded to attack Harry in a controversial statement on the second consecutive night.

“So I got a lot of responses to comments I made about Harry last night. Now we don’t need Harry, who’s from England, to lecture us about our ‘crazy’ First Amendment that he can’t understand,” Hannity said on his Tuesday show. “Do you think censorship and suppression of thoughts is a good thing? Do you want the government to be able to determine what people are allowed to think, believe and say”? he added.

Hannity also condemned Prince Harry and Meghan Markle for their response to comments Piers Morgan made after their bombshell interview with Oprah Winfrey in March. Hannity  hit out at Harry for “chasing” Piers Morgan.

Let me make this clear: you are good with your own government? Because after your interview with Oprah worldwide – and Piers Morgan gives his honest comments about it, has a different opinion about it – are you actually going after him? ‘

No-Show for Harry at Diana Memorial Event in July?

Both Prince William and Harry are due to lead the event on July 1 when a statue to commemorate the 20th anniversary of Princess Diana’s death will be unveiled in the gardens of Kensington Palace, there are rumours however he will refuse to attend. Please remember to check for updates on this story.