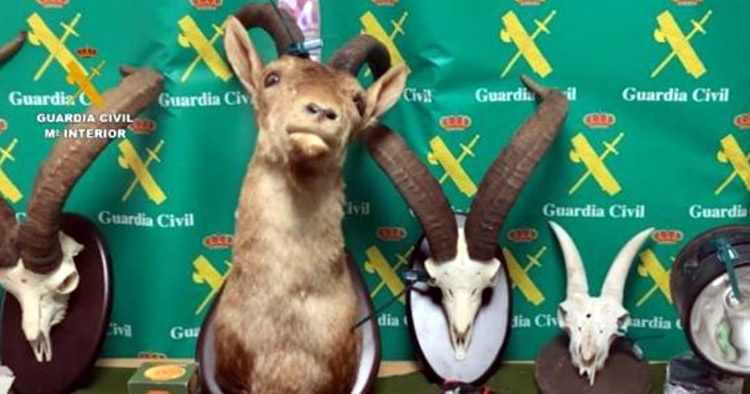 Officers belonging to the Nature Protection Service (Seprona) of the Malaga Guardia Civil Command have arrested two men during ‘Operation Fiducia’, in which they investigated alleged crimes of the poaching of mountain goat in the Axarquía region.
Another three are also under investigation, suspected of the alleged commission of crimes against fauna, illegal possession of weapons, and electricity fraud.
‘Operation Fiducia’ was launched last December, in collaboration with the Hunting Service of the Junta de Andalucía and with the Andalusian Hunting Federation of Malaga, after Seprona had been informed that poachers could be operating in the grounds of a private hunting reserve located in Nerja, hunting mountain goats or wild boar.
The situation had initially come to light when the owner reported noticing that the numbers of ibex had dropped dramatically in the private reserve, which resulted in economic damage to the preserve and its associates, worth more than €60,000, according to axarquiaplus.es.
Once their investigation was underway the officers quickly identified the poachers to be residents of the immediate area, owners of agricultural farms near the preserve, through which they could easily monitor the movements of the animals they were targeting, and during a visit to one of these farms, the Seprona officers even discovered a large trap cage.
It was identified that the poachers were operating both during daytime and night, at all times of the year, and always close to their own facilities, which gave them a quick means of escape should they need it, and they could also transfer their killed trophies home easily.
Conducting six searches, the officers uncovered ten ibex trophies, 17 long guns, with more than 1,300 rounds of ammunition of varying calibres, night sights, telescopic sights, spotlights, a laser pointer, and numerous other items for stealth practices, and police also intercepted transmissions among the poachers, while among the seize weapons they found a completely illegal, unregistered shotgun, whose calibre had been illegally modified.
The detainees have been made available to the head of Court No1 in Torrox for sentencing.
The Euro Weekly News is running a campaign to help reunite Brits in Spain with their family and friends by capping the costs of PCR tests for travel. Please help us urge the government to cap costs at http://www.euroweeklynews.com/2021/04/16/ewn-champions-the-rights-of-brits-in-spain-to-see-loved-ones-again/