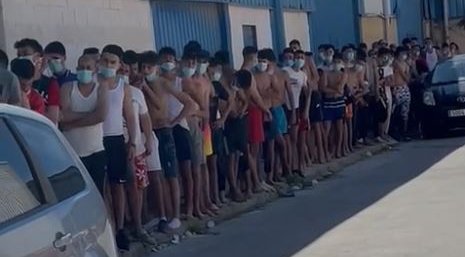 A large number of “very young” babies are being brought into the Spanish enclave of Ceuta, the Red Cross has warned.

“Unusually many very-very young babies are arriving. We are not used to this. They tend to arrive older. Not like in this case, whole families are coming with their children,” Isabel Brasero, the Red Cross’s communication manager in Ceuta told radio Onda Cero on May 19.

Thousands of migrants have poured into the enclave since Monday night causing political and humanitarian headache for the Spanish government.

At least 1,500 migrants are children who will eventually be taken into care homes and institutions in Spain.

Prime Minister Pedro Sanchez said up to 4,800 adult migrants of the more than 8,000 who entered Ceuta during the previous two days had been sent back to Morocco.

“We are carrying out the immediate handover of those who have entered irregularly,” he told parliament.

Operations to disperse migrants are continuing on both the Spanish and Moroccan sides of the border.

However, diplomatic tensions between Madrid and Rabat are rising.

“What did Spain expect from Morocco, which sees its neighbour hosting the head of a group that took up arms against the kingdom? Morocco has the right to lean back and stretch its legs so that Spain knows that underestimating Morocco is costly,” he wrote on Facebook.