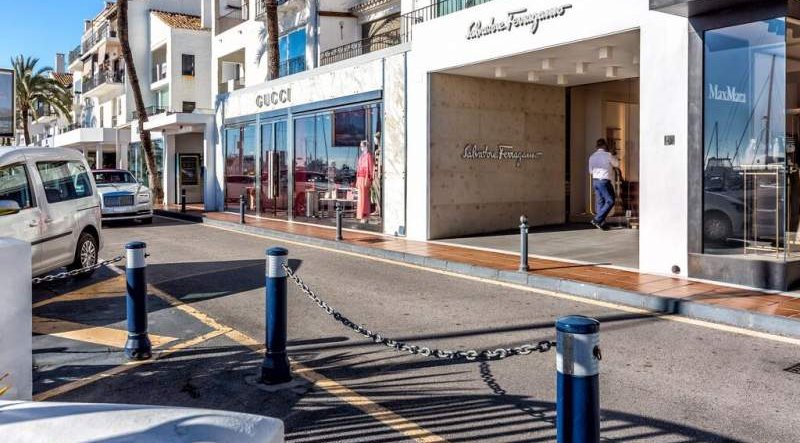 A COURT in Marbella has declared that the rental contracts charged by the Puerto Banús concessionaire for the terraces of the hotel and catering establishments located on the first line of Ribera Pier are void.
Designer shops, high-end restaurants and fashionable bars and cafes along the first line of Puerto Banus have for years attracted the rich and famous into Marbella. The port also has one of the most expensive marinas in Spain and high terrace taxes have long been a bone of contention for the businesses that occupy ‘the strip’.
The ruling establishes that these spaces are in the public domain and belong to the Marbella City Council and therefore has declared the lease contracts null and void.
The law firm that represented the business owners, Balms Abogados, pointed out that the ruling, which came after nearly three years of a legal dispute between the concessionaire and the business owners, states that the land for which the concessionaire of the port enclave inaugurated in 1970 collected the leases is public.
The ruling, according to Balms Abogados, stated that: “It must be concluded that the urban classification of the surfaces called terraces in dispute is that of a municipal public road, of use and public domain, as it results from the 1986 PGOU in force in Marbella and two affirmed municipal architects of the Town Hall Urban Discipline Service.”
It also includes that the surfaces that affect the terraces located in Muelle Ribera are a municipal public road and “cannot be the object of a private contract, but only, where appropriate, of an administrative concession and, of course, are not the property of the defendant Puerto José Banús SA.”
The law firm added that the Court of First Instance also refers to a plenary agreement of the Marbella City Council of July 11, 1995, that declares that the Puerto Banús roads are for public use and domain, which, Balms Abogados highlighted, confirmed the Superior Court of Justice of Andalucia and the Supreme Court “taking such lands open to public use as roads for more than 30 years.”
It is understood that no notice of an appeal has been lodged by the port authority as yet. It was not mentioned if the businesses would be allowed to claim back all terrace taxes paid over the last three years but, if it is, a sizeable amount will have to paid back by the port authority.