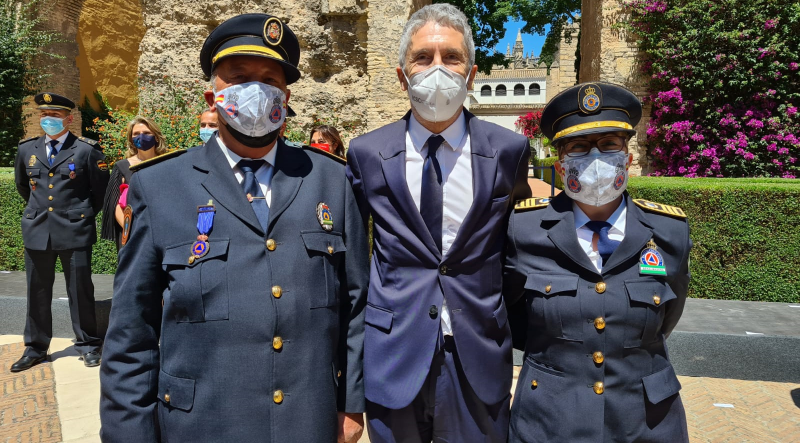 Presentation of the Medal of Merit Benalmadena Council

REPRESENTATIVES of the Association of Volunteers for Civil Protection of Benalmadena travelled to Sevilla on May 13 to receive a Medal of Merit for Civil Protection, from the Minister of the Interior, Fernando Grande-Marlaska at a ceremony held in the Gothic hall of the Real Alcázar.

CUSTOMERS of the shops in the Old Town of Marbella will enjoy one hour of free parking in the Market car park so long as they spend at least €10 for purchases in these establishments thanks to the Association of Merchants and Professionals.

ON May 16, a 43-year-old man who was enjoying a meal with his family in Puerto Banus suffered a serious heart attack and emergency services including a doctor and Local Police spent time resuscitating him before he was stabilised and transferred to the Costa del Sol hospital.na

TORREMOLINOS will have its first permanent Gourmet Market celebrating the Taste of Malaga which is due to open in June, situated in the old City Hall facility in the Plaza de la Independencia which used to house the municipal market which has now been renovated.

THOSE aged between 16 and 30 who live in Fuengirola may apply to take part in a paintball event to be held in Antequera on Saturday June 5 which will cost €10 to include travel and safety equipment as well as guns and 300 paintballs.

CYCLISTS taking part in the latest Ruta del Sol Cycling Tour of Andalucia left La Cala de Mijas on Tuesday May 18 en route for Zahara de la Sierra in Cadiz although some residents were upset that roads were closed and they couldn’t access their properties.

SWIMMER Carlos Vinuesa Godoy, who currently lives in Torrox plans to swim the 35 kilometres from La Linea to Estepona on May 29 in order to raise funds for local charities.

CASARES has been declared one of the five most beautiful towns in Malaga Province according to National Geographic Magazine alongside Archidona, Frigiliana, Genalguacil and Mijas Pueblo.

AFTER dropping to just four blue flags in 2019, Marbella has bounced back this year with seven for beaches and one for the Virgen del Carmen marina.