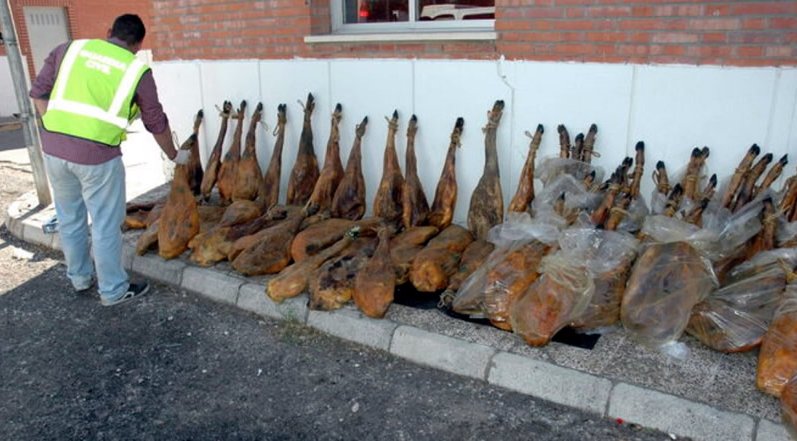 Thieves Escaped With A Stash Of Hams In La Puebla del Río, Sevilla after crashing a stolen car into the window.

A GANG of ram-raiders attacked a supermarket in La Puebla del Río at dawn this Monday May 17, driving a stolen BMW into the shop’s main doors to gain entry, and once they were inside, heading straight for the section containing the expensive hams, before loading as many as possible quickly into the car, and then fleeing the scene.

The daring robbery took place at around 5am, at the Cash Fresh Chain supermarket which is located on Practicante Antonio Montero street, one of the town’s – which has approximately 12,000 inhabitants – main streets.

Wearing hoods to avoid identification, and also with gloves to avoid leaving fingerprints, the criminals were clearly well organised, using a grey coloured BMW car – that was reported as stolen earlier in the day – to smash in the main doors of the establishment, according to a statement given by the owner of the store to Diario De Sevilla.

Footage from the supermarket’s security cameras caught the whole incident, and the robbers were only inside the premises for about one minute, knowing exactly what they were targeting, and acting very quickly to load as many hams into the vehicle as they could before making their getaway in the stolen car, which saw the thieves escape.

An investigation into the robbery has been launched by the Guardia Civil, with the security camera footage being checked for clues to the identity of the thieves, but there have been no arrests at this time.

Robberies of this type were common in Sevilla in recent years, but several operations by police against various criminal gangs in the city had seen the number of thefts drop, but products like the expensive hams, or sausages, always have a good value on the black market, especially in the weeks leading up to Christmas.