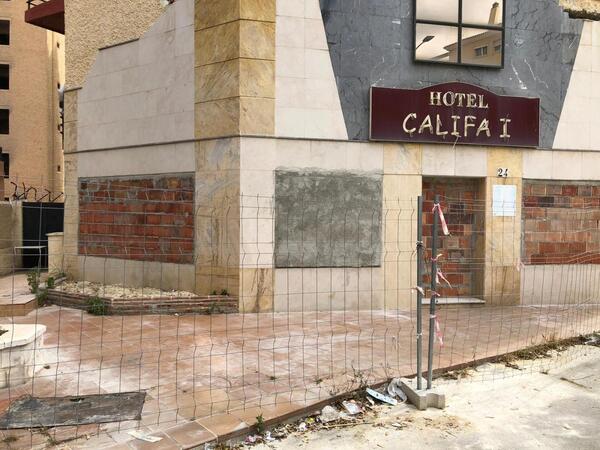 THE Councillor for Urban Discipline of the Torremolinos City Council (Malaga), Maribel Baeza, and the Security Councillor, Antonio Ruiz, announced that court number 1 of Malaga has issued an order to evict the squatters who are occupying the Califa I and II hotels, located in the city centre.

The councillor explained that “today is a day to be satisfied because we have been working for months to get legal coverage to solve this health and safety problem in the hotel environment.”

The mayor explained that “this court order not only allows us to execute the eviction but also obliges, once and for all, that the owners of the buildings clean and cover the entrances of the buildings in a safe and permanent way so that they (squatters) cannot access the hotels again.”

Baeza added that “Months ago we began the procedures to declare the two buildings as ruins, given the health and coexistence problems that were generated by the occupation situation. This declaration has forced both the owners and some businessmen who were interested in buying it to resort to the courts so that this demand from the neighbours could be attended to.”

Security Councillor, Antonio Ruiz, stressed that “the court has recognised that the situation that has been created here is unsustainable and we must act as soon as possible.

“In the coming weeks we will start by first communicating to the people who live here that they must leave the buildings and later we will coordinate so that those in charge carry out the cleaning of the interior, and the walling of all the entrances so that this does not happen again,” it is finished.

A fire broke out at the Hotel Califa II in Torremolinos, left empty since 2013, in October 2018. Its location, close to residential blocks, made its extinction difficult, with a helicopter required as part of the operation. Roads were shut off and traffic chaos ensued for more than two hours.

The hotel, occupied by squatters for a number of years, has been the subject of numerous complaints by residents.