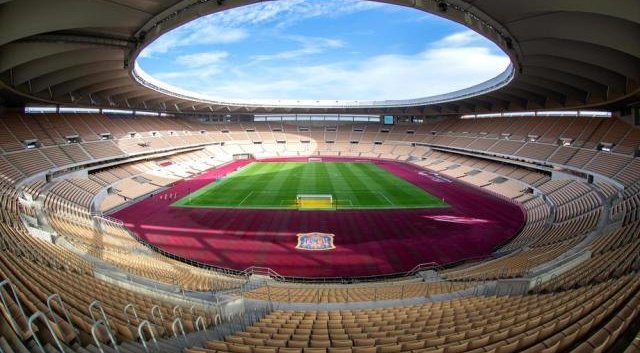 Juan Marín, the vice president of the Junta de Andalucia, and Minister of Tourism, was at the Andalucian Euro 2020 stand at Fitur in Madrid today, promoting the matches that will be played in Sevilla’s beautiful La Cartuja stadium in June, where he announced that the income generated by these matches could be as much as €215m for the Sevilla economy.

La Cartuja will host Spain’s Group E matches in June, when they will play against Sweden on Monday 14, Poland on Saturday 19, and Slovakia on Wednesday 23, plus the stadium will play host to a round-of-sixteen match on June 27.

Accompanied by José María Arrabal, the Secretary-General for Sports, Mr Marín spoke of the great honour that Andalucia has in staging games for Euro 2020, saying the tournament is “the second most important in the world of football after the World Championship, will be an important promotion of the Andalucia destination and will generate a high tourist and economic impact in the city of Sevilla and its surroundings”.

He explained the estimates made by UEFA, that the four matches in Sevilla can “generate a minimum economic return of 215 million euros”.

This figure includes €73m of direct economic impact, created by 16,000 spectators attending each match, spending on average €380 per day, with an average stay of three days in the city, and then the remaining €142m would be broadcasting rights, with an estimated five billion people expected to watch the televised tournament worldwide.

The European Championship returns to Spain for the second time in history, 57 years after Spain won it back in 1964, when it used venues in Madrid and Barcelona, and for this edition, Andalucia will be the only venue, with all four matches to be played solely at the Estadio de La Cartuja in Sevilla.

For the first time in its history, Euro 2020 is being staged in an unprecedented 11 venues across Europe, to commemorate the 60th anniversary of the creation of the competition.