Hole In The Roof Criminal Arrested in Spain’s Almeria 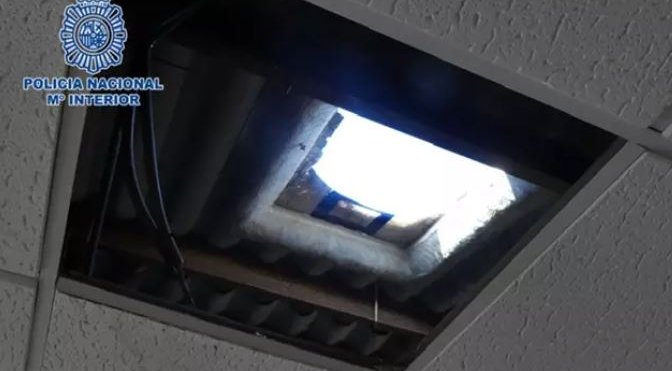 Hole In The Roof Criminal Arrested in Spain’s Almeria.

A “hole in the roof” criminal has been arrested in Spain’s Almeria.

A known criminal has been arrested in Almeria who has a history of committing “hole in the roof” crimes. The criminal was dedicated to robbing buildings after having made a hole in the ceiling.

National Police in Almeria have arrested a “known criminal” that is thought to specialise in the ‘rififí’ technique. This is a strange technique which involves drilling a hole through the roof of the building to allow the perpetrator to then enter illegally and commit a robbery. After entering the building by means of the hole, the burglar then disables the alarm and security systems.

The incident took place in the early hours at the Sierra Alhamilla road, in an industrial building. The burglar was able to gain access to the building by accessing the roof and then drilling a hole through which they were able to climb. Not only did the perpetrator manage to steal around 2000 euros but they also stole a variety of tools and multiple mobile phones.

According the police the perpetrator was a “habitual offender” which enabled officers to easily identify him. The man was said to have unique abilities and the police commented that: “The agility provided by his peculiar physique determined his criminal specialisation.”

The suspect was soon arrested and has a history for this particular type of robbery. The perpetrator had been released on March 20 from prison in Almeria. He had served his sentence at the El Acebuche prison and since leaving there he had been arrested on multiple occasions for burglaries.

The accused has been brought before the courts on suspicion of at least three burglaries which were committed within Almeria.

In other Almeria news, Vera playa is set to kick off the last stage of the 67th edition of the Ruta del Sol Cycling Tour of Andalucia.

Vera Playa will host the start of the final stage of the 67th edition of the tour on May 22. The tour began in Mijas on Tuesday May 18, but now expats and Spaniards alike will be able to watch the event as the final stage starts on Saturday.

The final stage will begin from Vera Playa and cover over 100 kilometres as it heads towards the Geoda de Pulpí, a stunning tourist spot in its own right.

The councillor for Sports of the city council of Vera, Alfonso Garcia speaking of the event has said that: “it is a great satisfaction to have in our town one of the most important sporting events on the national and international scene, as is the Vuelta Ciclista a Andalucia.”