Fire In Tenerife Is Spreading Towards Teide National Park 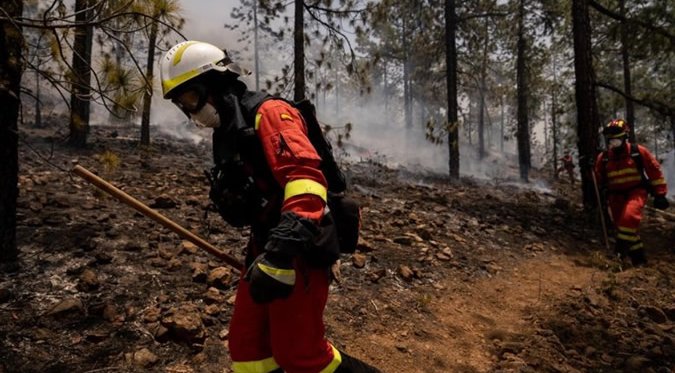 A fire that broke out on Thursday morning (May 20), in the Chajaña ravine of the municipality of Arico, on the island of Tenerife, in the Canary Islands, so far reportedly affecting 1500 hectares (6000 acres), with a front of more than 20km, which is being fanned by strong winds, is reported to be heading into the boundaries of the Teide National Park.

To combat the blaze, the Ministry for the Ecological Transition and Demographic Challenge (MITECO) has deployed air resources to try and help extinguish the fire, with four helicopters, and more than 300 firefighters, many brought in from the neighbouring islands, already in action tackling the fire, and a second seaplane has been deployed as a measure to control the fire, with a third one planned to join on Saturday morning, according to eldiario.es.

Ángel Víctor Torres, the President of the Canary Islands, said in his press conference today, “The fire has already entered the Teide National Park. At the moment, the fire affects a sparsely forested broom area, affecting the scrubland and not the pine forest”.

President of the Cabildo de Tenerife, Pedro Martín, added, “This is a surface fire, a positive aspect, because the needles are burning and not the tops of the pines, which would make their control more complicated”.

A concerted effort, with a larger number of firefighters, is being concentrated on one flank of the fire, to prevent it from reaching Granadilla, while another flank is reportedly spreading towards Teide, with the main front of the fire heading towards the Barranco del Río.

Manuel Durbán, the director-conservator of the Teide National Park, issued a resolution this Friday through the Cabildo de Tenerife, notifying the public that several trails that pass through the park are of course closed until the fire is extinguished.