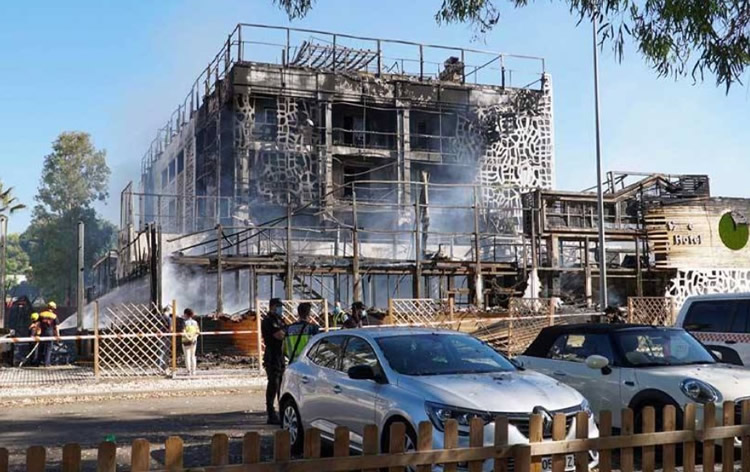 The National Police force of Marbella, on the Costa del Sol, after extensive investigations, has reported that the initial findings into the fire at the Sisu boutique hotel in Puerto Banus, in the municipality of Marbella, Malaga, during August 2020, point to the fire having been set deliberately.
A man of French nationality died in the fire, and several others were injured, and now the Provincial Brigade of Scientific Police of Malaga has issued a report in which three sources of the blaze were established, “compatible with the discharge of fire accelerating substances”, concluding “the intentional etiology of the fire”, according to another report, in this case of the Group of Money Laundering and Anti-Corruption, which is investigating the case.

Investigators pointed to the finding of three primary sources of the fire, all of them in the interior, so “necessarily the perpetrator or perpetrators had to be inside the establishment at the time of its initiation. The perpetrators have been people with the ability to move around the property”.
In the report of the Money Laundering group, to which Europa Press has had access, details of which are with Court No1 of Marbella, it is revealed that it was not possible for the investigators to gain access to any security camera footage of the beginning of the fire, “since the primary sources correspond to areas that are not covered by the cameras”.
A report from the Marbella Firefighters, who tackled the blaze, speaks of “manipulation in some means of extinguishing the building”, and of “deficiencies in compartmentalisation systems”, claiming they had tried to use different firehose installed in the building, “but they were manipulated, marking pressure and without water”.
UDEF investigators point out that after establishing “the intentionality” of the fire and these “deficiencies” it is necessary to investigate the possible motives, one of them the economic and patrimonial, requesting the court in November of last year, a series of proceedings related to the people and companies that manage the hotel to be able to carry out these investigations.
A couple is responsible for the management of the hotel, a woman who is the agent of several companies, along with a man who, supposedly, “appears in financial intelligence reports for alleged links to suspicious money-laundering operations in 2006 and 2008 and for relation to companies based in tax havens”, as reported by 101tv.es.
Also included in the report are references to previous incidents in the establishment, such as a small fire that occurred in 2017, for which insurance money was claimed, and also the new contract with said company, signed months before the accident “within the state of alarm” and “while the establishment was closed”, as well as mentioning the “continuous disagreements” with the property due to debts and “breaches” of contract.
The Euro Weekly News is running a campaign to help reunite Brits in Spain with their family and friends by capping the costs of PCR tests for travel. Please help us urge the government to cap costs at http://www.euroweeklynews.com/2021/04/16/ewn-champions-the-rights-of-brits-in-spain-to-see-loved-ones-again/