Rubbish Collector Hands €9,000 Into Police He Found In Bag Of Old Clothes 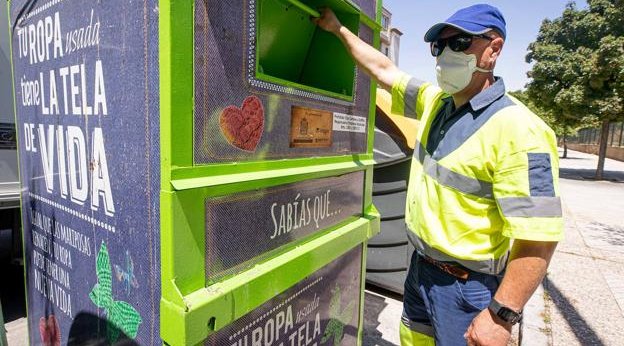 Rubbish Collector From Granada Hands €9,000 Into Police He Found In A Bag Of Old Clothes.

A good samaritan rubbish collector from Granada in Andalucía, Spain said he had a phrase that came to his mind when he found himself with €9,000 euros in his hand, divided into 50-euro notes: “What is not yours, is not yours”. And so he took them and handed them in at the local police station. “Here behind me I have my wife telling me the same thing: it wasn’t mine and I had to return it… I didn’t hesitate at any moment”, says Juan Miguel, who found the stash among a collection of second-hand clothes.

The chance finding happened on Saturday when this Inagra rubbish collector and his colleague collected bags of used clothes from containers in the city of Granada. There were seven of them altogether scattered around different areas of the city- he couldn’t say exactly where they picked up the bag containing the ‘prize’. Inagra is a cleaning and collection service company based in Granada, Andalucía.

As they don’t take this waste to Atarfe (waste site) at the weekend, the lorry was left loaded at the plant, full of the used clothes that ended up in the green containers. Nobody had any idea that for two nights, the (almost) 9,000 euros was lying in the rubbish truck!

The discovery took place on Monday, May 17, says Juan Miguel Clavero, who was reluctant to give his real name and to be in the photo because he does not want to be in the limelight. He understands that his story is normal, an anecdote from work. He doesn’t consider himself a hero or extraordinary because he has handed over money that the owner had probably thrown away by mistake- how many people however would hand it in?

When they were about to unload the lorry, a bag fell at random and when it hit the ground, it opened. And there was “one of the little ones” hanging out the side of one of a tiny safe. By pure chance, Juan Miguel hit it with a hammer and opened it: “It was just to find out what was in it”, he says now with a smile. He wasn’t expecting that surprise. “Normally, the boxes usually contain letters, photos or other souvenirs, but this time there was €9,000 euros,” says Juan Miguel Clavero.

There, with the money in his hand, this garbage collector from Granada did get worried: “Seeing so many banknotes made me nervous”, this Inagra worker now admits. He didn’t have to meditate, reflect, or question his decision. What’s more, he first went to the police station and it wasn’t until later that he told his bosses about the banknotes he had found in the bag of clothes.

There at the police station, Juan Miguel handed over the money, although he could not give the police any more details. The safe was open, there was no information like letters or photos in which to identify anyone from.

Juan Miguel says that the police told him that if the owner of the money does not turn up within two years, it will be his. “I don’t think about that… I just handed it over, I don’t think that in a couple of years’ time I could get 9,000 euros”, says the humble garbage collector.

He hasn’t earned a single euro more than his salary this month collecting rubbish, but Juan Miguel has achieved some peace of mind. “I can say that I sleep peacefully”, says this worker who did not hesitate to return the money even though he knows that it is difficult to locate its owner. Your used clothes have the fabric of life’, says the slogan of the containers that Juan Miguel collects. On this occasion, it could have changed someone’s life, but he decided to be honest and return what was not his and that is his motto.