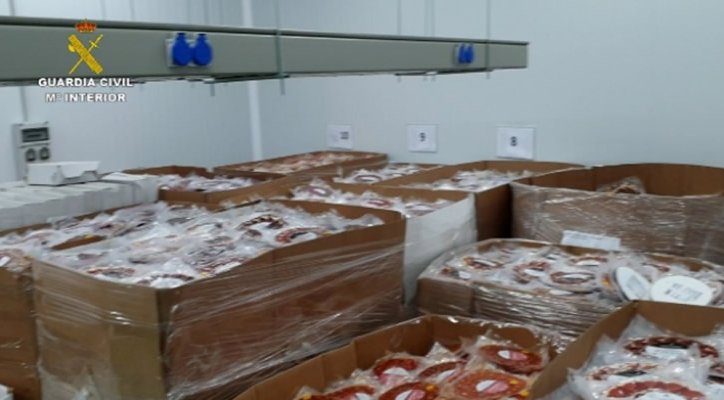 The Guardia Civil, during ‘Operation Slice’, has arrested six people and put another two under investigation in the Spanish cities of Madrid and Salamanca, charged with the suspected sale of fraudulent meat products throughout the country.

As explained in a press release, the Seprona unit launched an investigation into individuals belonging to seven food companies located in the provinces of Madrid, Córdoba, Toledo, and Badajoz, after suspicious documentation had been detected in batches of packages of sliced loin, shoulder, and ham that had been prepared for marketing as Iberian and Iberian bait products in a warehouse in Córdoba, that were ready to be distributed to a major supermarket chain.

Investigations uncovered an operation where meat products were being fraudulently labelled in some instances with the image of the Guijuelo Protected Designation of Origin (PDO) – which is used to authenticate Iberian meat products in the market – designed to fool consumers into believing they were purchasing actual Iberican meat products.

During raids on the companies involved, Seprona officers seized 63,123 packages of sliced ​​products, with a market value of €967,000, meat products that could have caused a risk to public health as they were considered unfit for human consumption.

The arrested have been charged with crimes against public health, fraud, forgery against industrial property, and theft related to the market and consumers.

A further investigation of a logistics centre of the same supermarket chain, in Getafe, saw another 5,768 packages of supposedly Iberian products seized by officers, while in the supermarket’s centres in Córdoba, Toledo, Barcelona, ​​Seville, Malaga, Alicante, Almería, Cádiz, Zaragoza, and Valladolid, thousands more containers of sliced products were discovered with fake Iberian labelling, a total of 56,100 packages of sliced ​​products being counted.

As well as the false labelling, the detainees had been falsifying health records of third-party companies without their consent, as well as falsifying and manipulating records of their traceability, as reported by 20minutos.es.