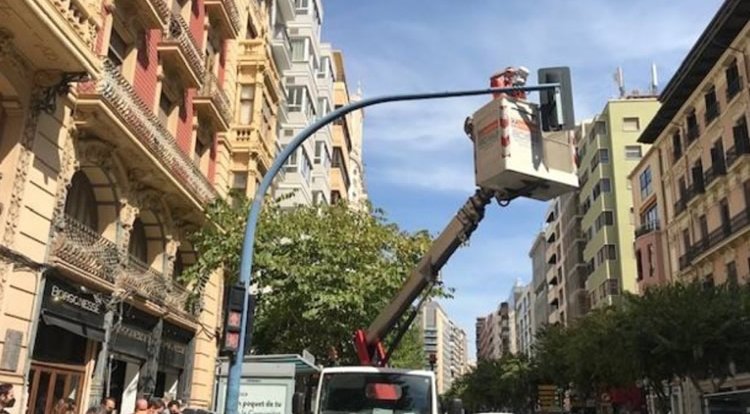 Alicante Town Hall began the installation on Friday 21, of a total of 156 cameras, in forty different locations in the city, that will aid with the recognition of license plates and traffic regulation, designed to improve mobility within the city.
José Ramón González, the Traffic Councillor has insisted that the cameras are not being installed with the intention of imposing fines, and that they are a part of “one more step” within the project ‘Alicante Se Mueve: Being Smart’.
Mr González explained that Alicante Town Hall aspires to have a ‘smart’ city, connecting traffic in real-time, while creating an innovative traffic management system at the highest technological level, stressing that the cameras are not radars and do not control speed, so they will not be used to penalise vehicles.
By installing the cameras at strategic points throughout the city’s network of roads, the Town Hall traffic department hopes to gather useful information which will be generated and the data processed in real-time, therefore improving traffic flow in the city, as reported by lasprovincias.es.
The government team has clarified that “it is not a question of limiting traffic, but of going further and, even, being able to control public lighting or undertake an exhaustive monitoring of the machinery used in municipal services, such as cleaning”.
‘Alicante Moves: Being Smart‘ has a budget of almost €3m, financed 60 per cent by Red.es, an entity dependent on the Ministry of Economy and Business, and the other 40 per cent by Alicante Town Hall, with co-financing from the European Regional Development Fund (ERDF), under the slogan ‘A way to make Europe’.
Antonio Peral, the Councillor for Modernization and New Technologies, also attended the installation of some of the cameras in the city centre, and he also pointed out that the system is being fitted to “optimise and improve” mobility in the city,
The Euro Weekly News is running a campaign to help reunite Brits in Spain with their family and friends by capping the costs of PCR tests for travel. Please help us urge the government to cap costs at http://www.euroweeklynews.com/2021/04/16/ewn-champions-the-rights-of-brits-in-spain-to-see-loved-ones-again/