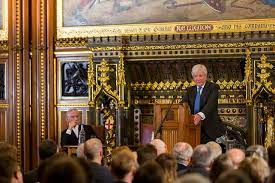 In the wake of the continuing dispute surrounding the BBC Panorama interview with Diana, Princess of Wales in 1995, Tony Hall has resigned as chairman of the National Gallery.

Lord Dyson’s report slammed the corporation’s former director general for leading a faulty and “woefully inefficient” internal inquiry into how Martin Bashir got the interview.

Lord Hall said that staying at the gallery would be a “distraction.”

“I have today resigned as chair of the National Gallery,” former director of BBC news and current affairs at the time Bashir interviewed Diana, said.

“I have always had a strong sense of public service and it is clear my continuing in the role would be a distraction to an institution I care deeply about.

“As I said two days ago, I am very sorry for the events of 25 years ago and I believe leadership means taking responsibility.”

Bashir had engaged in “deceptive behavior” by commissioning fake bank statements to secure the interview, according to a study by Dyson, a former master of the rolls. Hall was also aware that the journalist had told “serious and unexplained lies” about what he had done to convince the princess to talk with him, according to the study.

As other outlets inquired about how the show had gotten the world exclusive, Dyson said the company ““covered up in its press logs”

“Without justification, the BBC fell short of the high standards of integrity and transparency which are its hallmark.” according to the report.

Dr Gabriele Finaldi, director of the National Gallery, thanked Hall for his work at the institution. He said the former BBC director general had “demonstrated extraordinary commitment to the gallery and it has been a great pleasure to work closely with him as we have faced the challenges of Covid and as we prepare to mark the gallery’s bicentenary in 2024”.

Diana’s brother, Earl Spencer, is said to have written to Metropolitan Police Commissioner Cressida Dick, requesting that the force investigate the BBC and claiming that his sister had been the target of blackmail and fraud.

The BBC was also condemned by Prince William and Prince Harry over the Panorama interview on Thursday. The corporation’s failures, according to William, led to their mother’s fear in her final years, although Harry claims it was part of a  “culture of exploitation and unethical practices that ultimately took her life”.

As reported by The Guardian