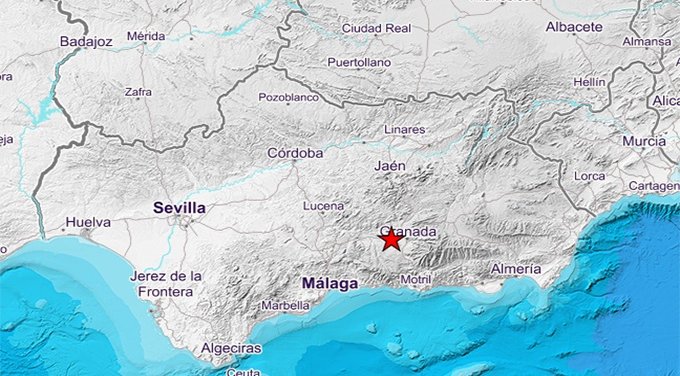 Granada In Spain’s Andalucía registered an earthquake just after midnight- in the early hours of Saturday morning, May 22.

This earthquake was felt at various points of the capital Granada and in the surrounding municipalities of the Metropolitan Area such as Atarfe, Albolote, Maracena, Fuente Vaqueros, Pinos Puente, Vegas del Genil and Láchar.
Related: Granada In Spain’s Andalucía Is Used To Earthquakes

The area is used to earthquakes, a series of earthquakes shook Granada province, in southern Spain, on Tuesday night, January 21, 2021.

The first two were felt at 9.36pm in Santa Fe and in Chauchina, near the city of Granada, with registered magnitudes of 4.3 and 4.1 on the Richter scale, according to provisional estimates by the National Geographic Institute (IGN).

According to the IGN, a total of around 10 quakes with magnitudes above 2.9 were felt clearly between 9.36pm and 10.18pm in the city of Granada and its metropolitan area, which is home to around half a million people.

As reported by the EWN, many families fled their homes despite the overnight coronavirus curfew and sought shelter outdoors. “There’s no damage, but we’re scared,” said Granada Mayor Luis Salvador in statements to the Cadena SER radio network. “Since December we’ve had more than 170 quakes. We’ve been told it’s better to have many magnitude 4 earthquakes than one magnitude 8. We’ve been told that this way, the fault gets weaker and prevents a bigger one.”

Andalucia’s emergency number 112 received more than 300 calls from various parts of Granada and even some from the provinces of Jaén and Málaga.