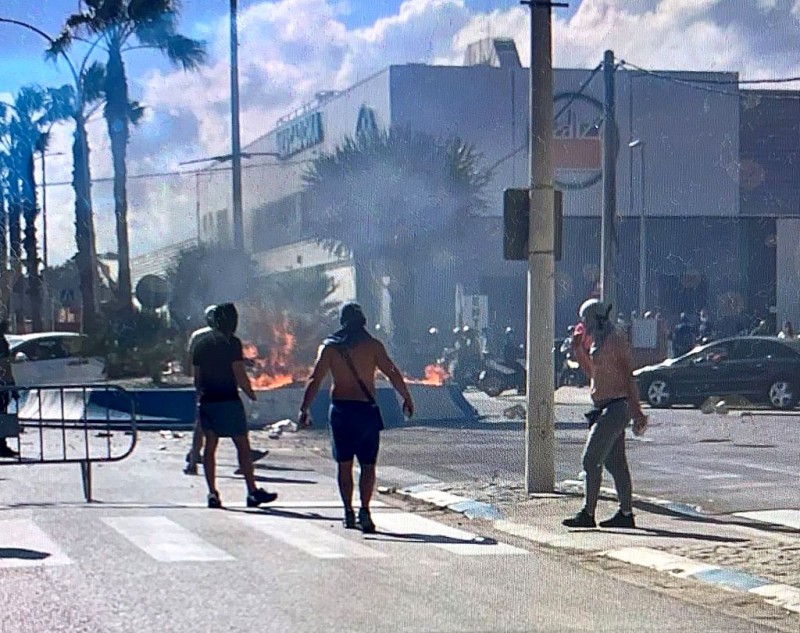 At least one of those arrested has already been sent to prison as being the alleged perpetrator of crimes against officers of the law and criminal damage- street containers and police patrol vehicles were the target of petrol bombs in riots, according to The National Police Twitter post.

Fourteen others that were detained are currently being investigated for crimes of threats and insults against the Guardia Civil officers- many of whom commented they had not witnessed such hate and violence towards the police before. The video below is courtesy of the Spanish National Police and shows the arrest of one of the alleged conspirators.

Between the early hours of Tuesday, May, 11 until Friday, May 14, there were constant attacks with petrol bombs and barricades in the La Linea city centre and the throwing of objects at the National Police- even a shotgun was fired at them.

A police patrol vehicle was set on fire but luckily it did not injure any officers. This was the response from an ‘incensed’ group of people that were convinced the two people that drowned did not receive help in time; something strenuously denied by the authorities and a matter which is under investigation.

Regarding the accusations that the Guardia Civil officers who arrived at the scene of the accident did not do enough to rescue them, subdelegate of the Cadiz government, Jose Pacheco, rejected all claims that officers had been carrying out an anti-drug operation when they came across the boat in trouble and said that they were instead carrying out a search operation and had been in the area.

The City Council of La Linea estimate the damage caused by the riots at a quarter of a million euros- not including the police vehicle that was set ablaze.