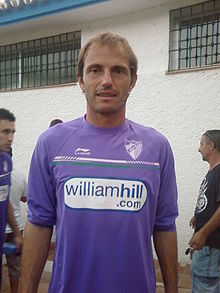 “Francesc Arnau Grabalosa, our sporting director, has died. We are profoundly saddened by his death and offer our condolences to his family at this difficult time. Rest in peace, he was a great man “.. Real Oviedo announced the death of the former Málaga CF goalkeeper, who later became director of the youth academy and sporting director. He was the sporting director of the Asturian team that Málaga played against last week. According to Málaga Hoy, no information about the circumstances of his death were given.

Arnau was educated at the Barcelona Youth Academy (Les Planes d’Hostoles, Girona, 1975). He was a youth international (MVP of an under-21 European Championship won in 1998 with other former Malaguistas such as Salva Ballesta and Vctor Sánchez del Amo) and had some brilliant moments in goal for Barcelona’s first team under Van Gaal, most notably in a 2-4 win at Wembley against Arsenal, where he put in a splendid display. However, he was unable to maintain his hard-won place in the goal, and in 2000 he signed for Málaga for a fee of 2.1 million euros.

Arnau’s career came to an end with this team.

The Catalan settled in Málaga and defended the Blue and Whites’ goal for 11 years, until June 2011.

He played 112 official matches for the Blue and Whites, 107 in La Liga (nine in Segunda and the rest in Primera) and five in the Copa del Rey, alongside Contreras, Calatayud, Goitia, and Muna.

He gave up 154 goals while keeping 31 clean sheets.

He was a member of Peiró’s great Málaga’s final stage squad, which reached the UEFA Cup quarter-finals.

He witnessed the club’s relegation to the second division, return to the elite, and eventual departure after Pellegrini rescued the division, just before the start of the club’s strongest two-year stretch in its history. In his last few seasons of active service, he had served as captain of the team, leading the team through tough times.

When Arnau was signed from Espanyol, he was in the youth academy as the right-hand man of the late Manel Casanova, and the academy was strengthened with a huge investment. He was the director of the youth academy before taking over as the club’s sporting director in December 2015, replacing Mario Husllos. He stayed until the start of the 2017/18 winter transfer window, when he was replaced by the Spanish-Argentine.

He stayed with the Costa del Sol until December 2019, when he signed with Oviedo for a contract that would last until 2022. Despite rumors linking him to Joan Laporta’s Barcelona candidacy in recent months, he remained as the Asturian club’s sporting director.