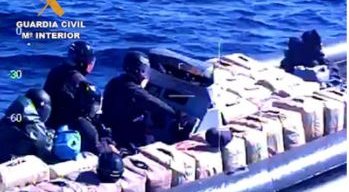 The Guardia Civil have dismantled a Murcian drug operation which was bringing in drugs to Almeria coastline.

As part of the REED operation the Guardia Civil have caught and arrested seven people who were part of a drug organisation which was smuggling in hashish to the Almeria coastline in Spain.

Around 10 miles offshore a high-speed semi-rigid vessel was spotted by the Guardia Civil using the SIVE (Integrated External Surveillance System). The boat was spotted about 10 miles off Almeria’s coast as it headed for the Torregarcia beach.

Officers from the Guardia Civil were able to watch as crew members from the boat stacked bales on the bow in a bid to get organised ready to unload the drugs as quickly as possible once they hit the shore. Multiple people were also noted on the beach which led the officers to believe that the drug drop was going to take place on this very beach.

The bales were quickly unloaded, taking only around 10 minutes in total. Guardia Civil officers were able to attend the scene where they found a van complete with multiple bales of hashish. They also discovered that next to the van were more bales and bottles which contained petrol.

The Guardia Civil arrested 3 people who had taken part in the drug operation and they seized a staggering 69 bales of hashish, one van, two cars, and 40 bottles that contained 25 litres of fuel in each one.

The investigation continued in the hopes of arresting further people involved in the drugs organisation. The officers carried out further investigations and investigated who owned the vehicles, and were able to make a further four arrests, and all of these people were residents in the Murcia province, as reported Almeria 24.