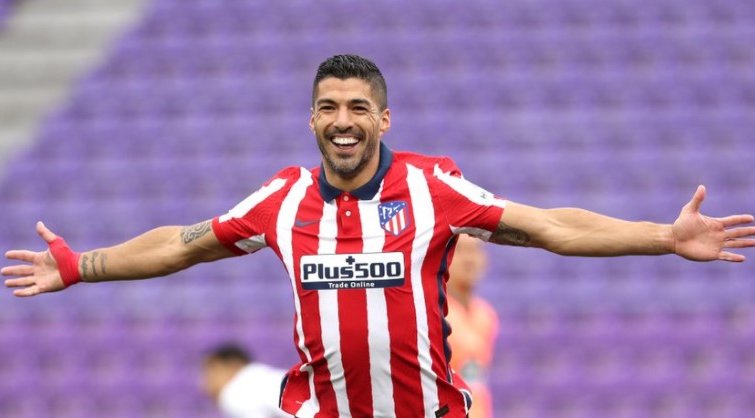 Atlético Madrid today, Saturday 22, defeated Real Valladolid 2-1 to win the LaLiga Santander title for the eleventh time in the club’s history, so it was inevitable, and expected, that there would be wild celebrations among the travelling fans who had congregated outside the José Zorrilla stadium, and there was a presence of police in anticipation of this.

While Enrique Cerezo had previously asked the Atlético fans to show restraint, and respect the coronavirus protocols, in the event of the club winning the title today, it was not thought that just minutes after their victory, the rojiblanco players would rush outside into the car park to join in celebrating with the fans, but, that is exactly what happened, and some very irresponsible scenes were soon having to be dealt with by the police officers.

The bulk of the team appeared outside in the car park, still wearing their football strips, and proceeded to hug and kiss the fans, in what were joyful scenes, but that under the present circumstances of the coronavirus pandemic, and its health hazards, seemed beyond belief, as footage uploaded to social media showed Carrasco, Marcos Llorente, Saúl, Oblak, Luis Suárez, and the rest, all, incredibly, with no thoughts of the possible risks to their health, in close contact with total strangers.

With the Euro 2020 finals coming next month, it remains to be seen what the players’ respective national coaches will have made of the scenes, which to all intents and purpose, were irresponsible on the part of the players, as reported by abc.es.

One by the one the police could be seen moving in to separate the players from the fans and point them in the direction of the waiting team bus that was ready to drive them away, with fans getting into minor scuffles with the police as a result, with one video even showing Saúl even intervening to calm the spirits of one boisterous who was standing up to a policeman, while Carrasco was seen assisting somebody who had been knocked to the ground during one of the charges that occurred.

Atletico’s players outside the stadium celebrating with the fans. Joao Felix here en route to the bus. pic.twitter.com/IGumsuZ9ab