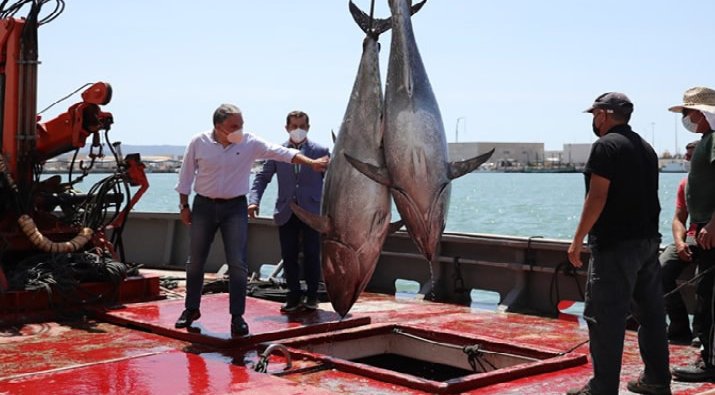 Elías Bendodo, the Minister of the Presidency, Public Administration and Interior, today, Monday 24, visited the facilities of fishing companies Gadira and Frialba in Barbate, Cadiz, to show the Board’s continued support for the fishing sector in Andalucia, especially those in the tuna fishing industry in Cadiz.

Mr Bendodo told the fisherman as he joined them, “there is talent, there is capacity and we only need to collaborate, public and private sector, without complexes”, pointing out that the future of companies in Andalucia depends on their specialisation and internationalisation and that to achieve this last objective, the Andalucian Government has developed Extenda, a tool that is at the service of Andalucian companies.

“We must be at the service of companies and workers because they are the ones who create jobs and wealth”, Elias Bendodo told the fishermen, assuring them of the commitment being made to combat things like the Asian algae that is affecting the coats, which the government has invested €1.5m into fighting, along with the promotion of the Technological Platform for the Telematic Sales of Fishery Products, an online sales platform that will have its pilot project in Barbate and is expected to be underway before the end 2021.

The minister added, “The Andalusian Government works to guarantee the future of fishing and to gain competitiveness because this sector is very important for the Andalusian economy, which includes 2,300 operators. Andalucia is working, because when companies are helped and allowed to work and do what they know, the results come”.