Local Police Save Pony from Animal Abandonment in Malaga 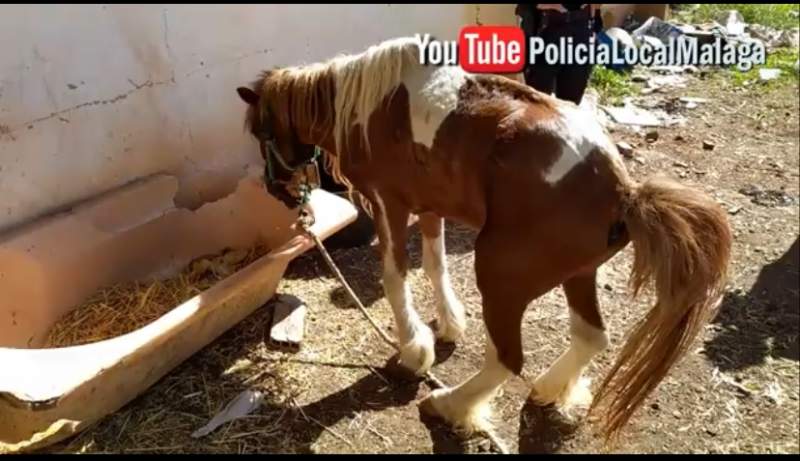 LOCAL POLICE are investigating a case of animal abandonment in Malaga regarding the owner of a pony, along with a dog and six roosters who were rescued, with one of them having been found mutilated.
The case of animal abandonment has been treated very seriously by local authorities. The Malaga City Council has carried out a presence plan in the La Corta neighbourhood, which began on Thursday, May 13, in which several units of the Malaga Local Police from the North District Headquarters of the Group have participated. Operational Support (GOA), the Research and Protection Group (GIP) and the Nature Protection Group (Gruprona), as well as personnel from the Operational Services Area, the Crane Service, and the Malaga Cleaning Services (Limasam).
The Gruprona agents located the pony with its coat in poor condition and with extremely long front hooves. In addition, it only had a minimal amount of water in poor condition in a bucket and little food placed in a bathtub that served as a trough, in which there were sharp and pointed elements. It is believed that the pony did not have an appropriate place to shelter from the rain and the sun, as reported by the Local Police in a statement.
The pony was inspected by a veterinarian from the Municipal Zoosanitary Center, having not been seen by a veterinarian for about 18 months. Subsequently, after issuing a veterinary report on the state of the animal, local Gruprona police officers opened criminal proceedings for the alleged crime of animal abandonment, leaving the animal in the care of its owner, who was warned of the obligation to improve the animal’s welfare conditions and put it under veterinary supervision, a situation that continues to be supervised by officers.