Spanish Cuisine is the Nation’s Ambassador, says Minister for Agriculture 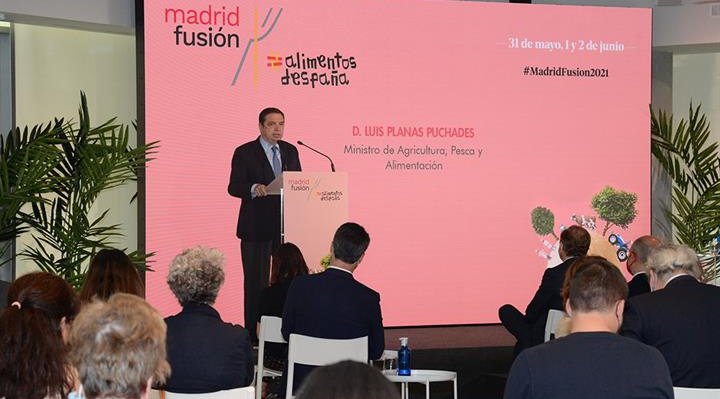 Spain’s greatest ambassador ever is its food, the Minister for Agriculture, Fisheries and Food, said today.

Luis Planas, who is usually wrestling with the European Union over the Common Agricultural Policy, was attending a presentation about the XIX edition of Madrid Fusion Alimentos de España, which will take place between May 31 and June 2 at the Ifema fairgrounds in Madrid.

This year the festival will recognise restaurants that work with traditional and local Spanish products and offer menus “deeply rooted in Spanish culinary traditions.”

Speaking about what makes Spanish food so notable, the Minister highlighted, “The healthy character of our products, since the Mediterranean diet means fresh and local products that provide health to those who consume them”.

He also praised, “The sustainability and the concept of circular economy that frames this edition of the Madrid Fusion event and that is fully in tune with the Government’s intentions, including the processing of laws to deal with food waste”.

Spain’s cuisine is recognised globally for its ability to retain the best of traditions while spearheading gastronomic innovations, and boasts a high number of Michelin starred restaurants across the country.

Last week two Spanish delicatessens were featured in The Financial Times’ exclusive “The 50 greatest food stores in the world” list.

La Garriga in Madrid and Murria in Barcelona were chosen along with famous delis in New York, Rome and Paris to star in the list published in the newspaper’s high-end supplement, How to Spend it.

Both La Garriga and Murria are steeped in history.

“There’s no shortage of excellent ham in Madrid, but the salty, gamey slices on offer at La Garriga are some of the best in town” and Murria was praised for its selection of local and gourmet delicacies.

“The exterior of this iconic modernist shop, founded in 1898, is almost as spectacular as the Catalan delicacies within,” according to the British paper.

The La Garriga store opened its doors 1959 in Tenerife. “The store offered products which at that time were completely unknown on the island such as Iberian sausages, botifarra of all kinds, llonganissa from Vic, and artisan cheeses. What the shop did that had never been done before was to combine a delicatessen with tasting. At La Garriga you could try products and also buy them to take home and that is still the model today across its shops in Spain,” La Garriga’s website says.

Murria has been open in the Ensanche district of Barcelona for more than 100 years and “specializes Catalan and international gourmet products with an assortment of artisan cheeses, Iberian ham, foie, caviar, smoked fish, oils, coffees, canned delicacies, wines and champagnes.”