Juanma Moreno Meets With The British Ambassador To Spain 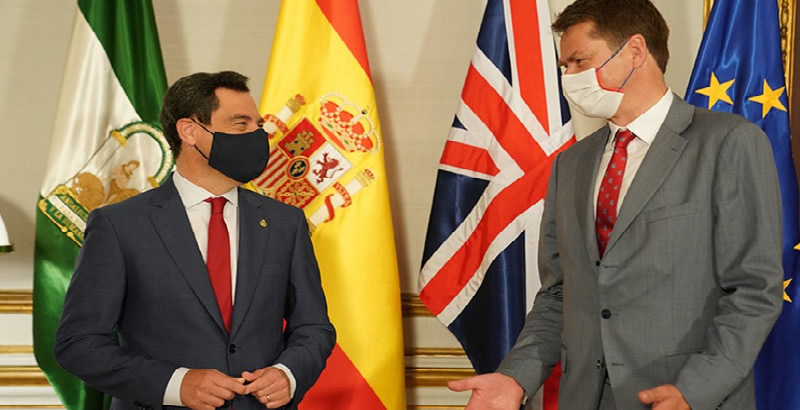 Juanma Moreno, the president of the Junta de Andalucía, today, Tuesday 25, had an audience at the San Telmo Palace in Sevilla, with Hugh Elliott, the British ambassador in Spain, and Andorra, where they discussed the priority issues regarding the relationship between their two countries.

Their main topic was of course Britain’s stance on allowing tourists to travel to Spain again, and to get Spain into the ‘green list’, where Mr Moreno pointed out all the effort and work done by his executive to present Andalucia to the world as a safe destination for travel.
Mr Moreno assured the ambassador that at the current rate of vaccination,  by the end of June, around 75 per cent of the population of Andalucia will be immunised against coronavirus and that 100 per cent of those over 40 will have had at least one dose, which means Andalucia very soon will have the necessary herd immunity, according to juntadeandalucia.es.
The president invited Mr Elliott to mediate with the British government and to explain the situation to them relating to the huge effort that the Andalucian government is making in order to ensure tourists will be safe if they come on holiday, reminding him that around three million British tourists normally visit the region every year, with another 110,000 residing in Andalucia.

Brexit was also a topic of conversation, with Mr Moreno stating that Andalucia will always be committed to maintaining fluid, close, and good relations in all respects with Britain, even advocating the possibility of new commercial projects between both countries, pointing out that Andalucia is the third-highest of the autonomous communities in Spain regarding exports to Britain.

Reportedly, between January and February 2021, 15 per cent of total Spanish exports to Britain were from Andalucia, and there are 1,202 companies exporting to the United Kingdom, 626 of them on a regular basis.

Referring to these facts, the president said, “These data certify the trust placed by the United Kingdom in Andalucia, in its possibilities and resources, and for the Government of Andalucia they represent an important spur at crucial moments for the post-pandemic economic reactivation. Andalusia is the best land to continue investing”.
The Euro Weekly News is running a campaign to help reunite Brits in Spain with their family and friends by capping the costs of PCR tests for travel. Please help us urge the government to cap costs at http://www.euroweeklynews.com/2021/04/16/ewn-champions-the-rights-of-brits-in-spain-to-see-loved-ones-again/