Mijas Arsonist To Stand Trial This Week In Malaga 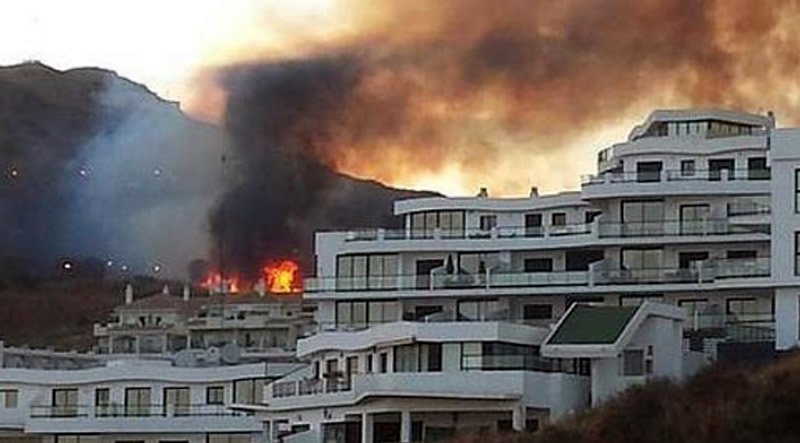 A TRIAL will take place this week in the Provincial Court of Malaga of a 50-year-old Spanish woman who stands accused of seven cases of arson in less than a one-month period, between July 19 and August 14, 2015, all in the Calanova area of the Mijas municipality, in Malaga Province.
Prosecutors have requested an 18-year sentence for the woman if found guilty, pointing out that she intentionally set the fires by using alcohol or ignition blocks in urban plots of the Calanova neighbourhood, which although at the time were not built on, were in close proximity to occupied properties.
The first fire was set on July 19, at 3.45pm, on a plot located between Calles Pintores and Escultores, with the resulting fire burning an area of around one hectare, and then, seven hours later, setting light to another plot of land between Calles Pintores and Orfebres, where around 200m² of land was burned.
Then, on July 25, at 5.30pm, she set light to a plot, again in Calle Escritores, causing damage to one hectare of land, and waiting until July 31 to start her next fire, in Calle Escultores street, where neighbours raised the alarm at around 9.30pm and extinguished the fire themselves before it could spread.
Between August 4 and 10, the woman started more fires in plots on the same streets of Calanova, causing damage to half a hectare of land, and 20 hectares, respectively, with her final fire, her biggest one to date, being started on August 14, in Calle Escultores, which burned two hectares of land, but also resulted in the urbanisation of Tropical Hills having to be evacuated when the fire spread close to the properties.
Immediately after this last fire, the woman was arrested, and even though her incidents never caused any personal damage, or any damage to property, an assessment made by the Ministry of the Environment and Territorial Planning of the Junta de Andalucia sets the costs of extinguishing her seven fires at €13,459 (£11.610).
The Malaga Prosecutor’s Office is requesting the Mijas arsonist be sentenced on seven charges of arson, and also be held responsible for the repayment of the €13,459 (£11,610) costs of extinguishing the fires.
The Euro Weekly News is running a campaign to help reunite Brits in Spain with their family and friends by capping the costs of PCR tests for travel. Please help us urge the government to cap costs at http://www.euroweeklynews.com/2021/04/16/ewn-champions-the-rights-of-brits-in-spain-to-see-loved-ones-again/