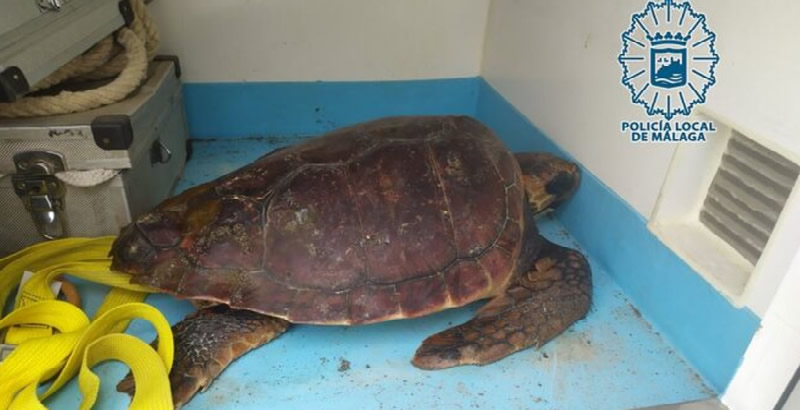 STRANDED Loggerhead Turtle Rescued by Gruprona officers on Malaga’s Cizaña Beach
Officers from the Nature Protection Group Gruprona, of the Malaga Local Police, have rescued a stranded loggerhead turtle – a member of an endangered species – from the La Cizaña beach in Malaga.
The incident happened at around 4.30pm on Thursday 20, and after receiving a call that the reptile had been found on the La Cizaña beach, the Gruprona officers were deployed to the said beach, where they discovered a group of young people with the turtle, who had already had the presence of mind to contact the Endangered Marine Species Recovery Center (Crema), who were directing them over the phone on how to care for the creature.
As instructed by Crema, the youths had been keeping the turtle out of direct sunlight, and were moistening her with plenty of water every five minutes, while the specialist officers verified that the reptile was a loggerhead turtle around eight to ten years of age, weighing approximately 25kg.

With the premises of the Crema emergency service being a long way from the beach, and in order to give this reptile from an endangered species the correct treatment, the Gruprona officers decided to transfer her directly to the Crema facilities, which are located in Malaga port, where subsequent veterinary tests on the turtle’s health showed satisfactory results, and she will be kept under observation at Crema until such time as they feel it is safe to reintroduce her back into her natural environment.

In a statement, Local Police reported that the reptile had a piece of plastic lodged in its mouth, which was removed by the veterinary doctor, along with some invertebrates remains from the digestive tract, and the Crema doctors were able to overcome the buoyancy problems that the turtle exploited initially, so that she can now fully submerge to the bottom of the tank.

The one remaining issue is her feeding problem, with Crema is working on, slowly helping her to start feeding again and to gain weight, before finally releasing her back into the wild, hopefully this Summer, as reported by malagahoy.es.
The Euro Weekly News is running a campaign to help reunite Brits in Spain with their family and friends by capping the costs of PCR tests for travel. Please help us urge the government to cap costs at http://www.euroweeklynews.com/2021/04/16/ewn-champions-the-rights-of-brits-in-spain-to-see-loved-ones-again/