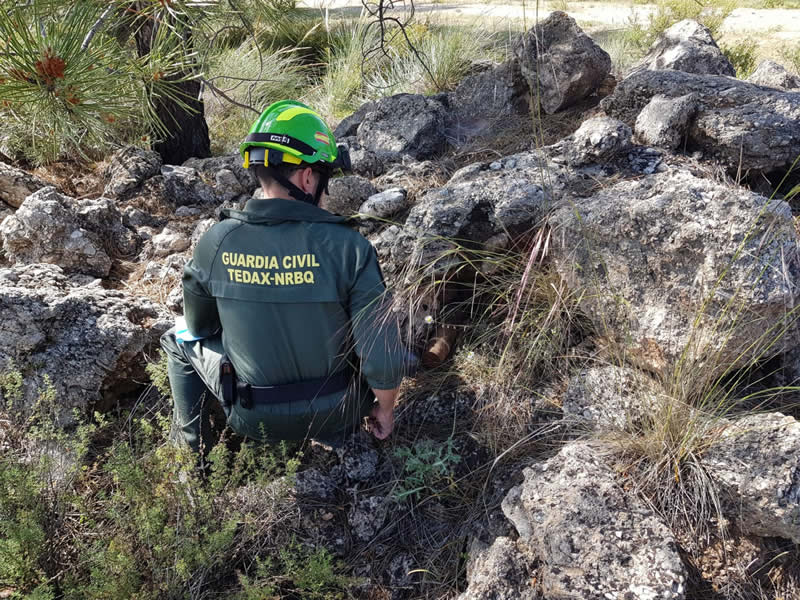 The Guardia Civil in Granada has carried out the controlled explosion of a 77-millimetre artillery shell from the Spanish Civil War that was found by a worker clearing out a farm in the Cortijo Balsaín, in the municipality of La Zubia, Granada.
On finding the shell the worker immediately notified the Guardia Civil, who deployed a unit from Güejar Sierra, which was sent to guard the artifact until the Tedax-NRBQ Team from the Granada Command arrived at the scene to take control of the situation.
Although in a bad state of oxidation, the artillery shell – manufactured in Spain for use in the Krupp 77/32 gun systems and equipped with a ‘plasencia’ model fuse – the bomb disposal experts were aware that the projectile still retained its fully intact elements, and that any sudden movement of it could result in its explosive charge being activated, which could cause serious injuries, or even death, to anybody in the blast zone.
The Guardia Civil’s Tedax-Nrbq bomb disposal unit is highly skilled in handling and dealing with explosive material, or unexploded projectiles, and always warn members of the public that should they uncover anything that they think might be such a device, they should never touch it, handle it, or try to move it, and, when it is possible, mark the area to prevent other members of the public accessing the location of the explosive until the police arrived.
Also, they say it is very important that any artifact should never be deposited in rubbish containers of any kind, or in waste collection points, and that it is always advisable to contact the Guardia Civil on the emergency numbers 062, or 112, as reported by granadadigital.es.
The Euro Weekly News is running a campaign to help reunite Brits in Spain with their family and friends by capping the costs of PCR tests for travel. Please help us urge the government to cap costs at http://www.euroweeklynews.com/2021/04/16/ewn-champions-the-rights-of-brits-in-spain-to-see-loved-ones-again/