Juanma Moreno Poses With The Eurocup In Sevilla 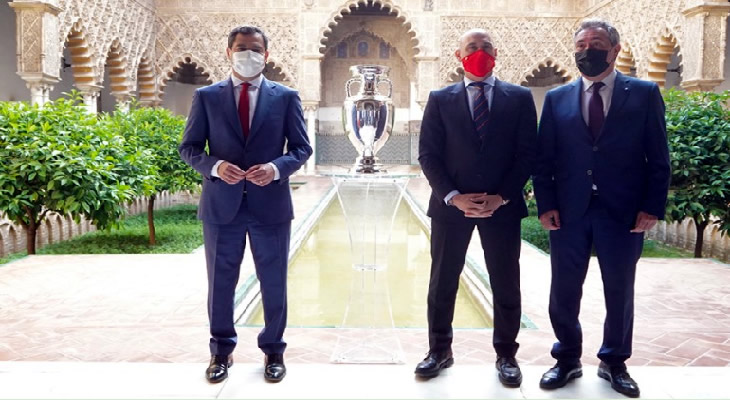 Juanma Moreno, the president of the Junta de Andalucia posed with the Eurocup at the La Cartuja stadium in Sevilla on Tuesday 25, and affirmed the pride that all of Andalucia has, knowing that a selection of the Euro 2020 tournament matches will be played there in June, while showcasing the beautiful city of Sevilla, and its magnificent stadium, to billions of television viewers around the world, as well as bringing a huge economic boost to the city.

Mr Moreno also stated that the Andalucian government will do everything in its power to ensure this celebration of European football is a total success, pointing out that in his opinion there is no better host for this tournament than the city of Sevilla, a universal city recognised for its rich cultural, social, historical, and gastronomic heritage, as reported by juntadeandalucia.es.

“Few cities have such an intense passion for football as Sevilla. We have always wanted to be player number 12 and we have been on many occasions. We have wanted to maintain the affective and emotional bond of this city with the national team and this moment embodies that permanent complicity between it and the fans”, he added.

The president also thanked UEFA for the level of trust it has demonstrated towards Sevilla and Andalucia, in the context of international sport, as well as in their status as a safe destination for the travelling supporters.

Finally, Mr Moreno pointed to the effort made by the Ministry of Education and Sports in refurbishing this modern stadium designed for large events, and has asserted that the choice of Andalucia as the venue is the result of the culmination of the work of two years of permanent efforts to locate the Andalucian community at the pinnacle of European sport.