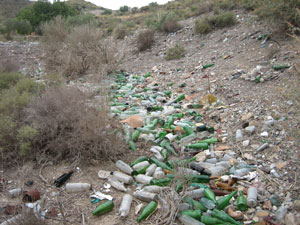 COMPLAINTS OF environmental pollution in Torremolinos mountains has been ongoing for the past seven years. Sergio Morales, a resident of Torremolinos and creator of the Torrenatura movement has been campaigning for the pollution to be dealt with accordingly for the past several years.
Among the actions that he himself has carried out, the one of a few years ago in the limestone where he even found animal remains. “It demanded that it be cleaned because it was full of cans and glass. Once I had cleaned it, the City Council sealed the well and told me that they were going to clean it, but they did a very superficial job, and they broke a part of the limestone to pour dirt over it and cover it. However, I came back with a shovel to dig what was left and I found more than 60 bags of dog remains, so I called Seprona, we used the microchip reader, but they were old remains and we could not read any of them”.
Now, faced with this municipal passivity, Morales has decided to raise his complaints before the figure of the Andalusian Ombudsman. He has been able to talk by telephone about this problem that exists in different parts of the municipality, accentuated in the Arroyo de la Cueva de la Higuera. Interestingly, it is a passing area to get to the Cañada del Lobo, a hiking route that the City Council promotes as one of the attractions of tourism, providing an alternative from the sun and beach. “There is everything there, from asbestos to cables, tires, debris and waste of all kinds because that is where the illegal landfill was,” he details.
As reported to Viva Málaga, this institution already has the documentation, as well as photographic and audiovisual material of Torrenatura to be able to study it and send a response to the Torremolinos government team, who, on occasions, has informed it that they do not act because the lands are privately owned. “I have been informed that we must act accordingly,” claims Morales. Throughout these seven years of complaints, he has sent numerous writings to the General Registry of the Torremolinos City Council. “At first I did get an answer, but they haven’t bothered for a long time”.