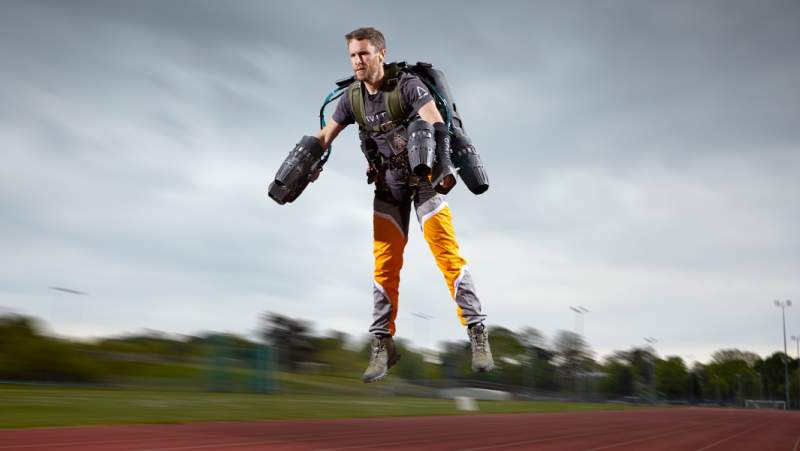 The first challenge saw Richard Browning channelling his inner Usain Bolt as he took on the 100-metre sprint in a body-controlled jet engine powered suit.

The aim was to beat Bolt’s world best of 9.58 seconds; Richard jetted across the finish line in just 7.69 seconds, earning him the record for the fastest 100 metres in a body-controlled jet engine powered suit.

Next up was the fastest 400 metres hurdles in a body-controlled jet engine powered suit, a record attempt which required a combination of speed and control from the jetpack pilot as the guidelines stated that the hurdles must be cleared one at a time in a definite up-and-down motion.

Taking on the challenge on foot alongside Richard was Southampton athlete Callum Gregson; both had their eyes set on breaking the current record set by a human of 46.87 seconds which had remained unbroken since 1992. Ultimately Richard was able to set the record with a time of 42.06 seconds.

Last but not least, a pole vault inspired challenge as Richard attempted to set a new world record for the fastest time to clear an elevated crossbar in a body-controlled jet engine powered suit.

The guidelines required the flight to mimic the trajectory of a human pole vaulter, travelling 40 metres forward and then, with an obvious upward motion, clearing the pole vault bar and landing safely on the mat.  With the bar set at 6 metres and 19 cm, 1 cm higher than the current human world record, Richard soared into the record books once again, setting a new record of with a time of 13.09 seconds.

“A couple of years ago we set the speed record in this equipment, and in fact that was beating a record we’d set with Guinness World Records a few years before then. Speed is a core ingredient of what we do here, and it’s a pleasure to come along and set more records,” Browning told Guinness.