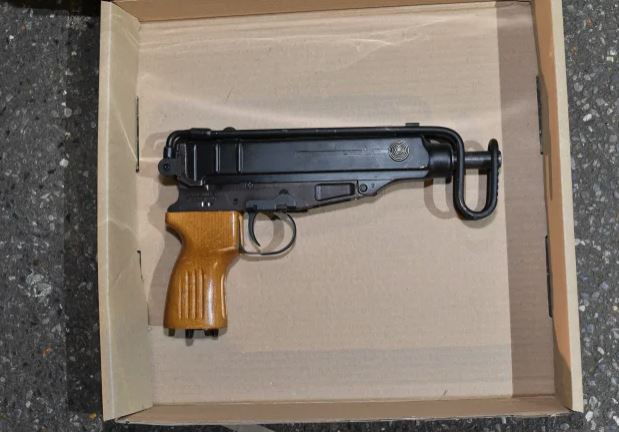 Machine Guns are popular in the US. Credit: Met police

There are more guns than people in the United States and American firearms are washing up in the UK and Europe empowering criminal gangs with evermore firepower.

That’s the message in a chilling new book documenting Americans’ love of deadly weapons. Between 2017 and 2020 almost 1,000 guns seized in the UK came from America and fears are growing that gangs will soon turn from knives to guns as their weapons of choice.

Publishers of “The Ameriguns” by Italian journalist Gea Scancarello and photographer Gabriele Galimberti, say, “Of all the firearms in the world owned by private citizens for non-military purposes, half are in the United States of America. In number they exceed the country’s population: 393 million for 328 million people.

“This is no coincidence, nor a matter of market alone: it is rather a matter of tradition and Constitutional guarantee. It is the history of the Second Amendment, ratified in 1791 to reassure the inhabitants of the newly independent territories that their Federal Government could not, one day, abuse its authority over them.

“Two hundred and fifty years later, the Second Amendment is still entrenched in all aspects of American life and this book frames its current status through what are seen as four fundamental American values: Family, Freedom, Passion, Style,” publishers,” Dewi Lewis added.

2020 was the deadliest year for gun violence in the US on record.