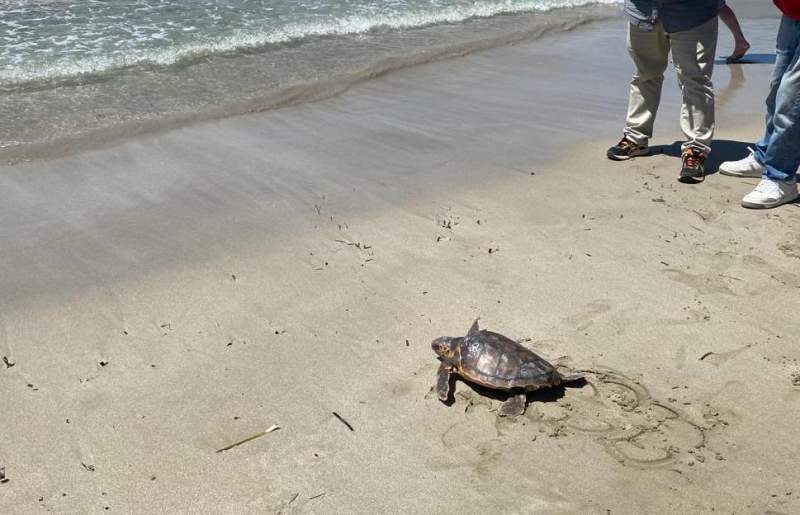 Back to sea CONCHETA, a four-kilo turtle, was recently released on Moraira’s Ampolla beach.  The injured turtle, found some months ago in Vinaros (Castellon), was nursed back to health at the Oceanografic Aquarium in Valencia City.
Happy hour DRIVERS will get an hour’s free parking in Benidorm’s Aiguera, Tomas Ortuño, Mercado and Ametlla del Mar car parks after the town hall reached an agreement with the concessionary company.  Local businesses and the hospitality trade have applauded the measure, which they said would encourage more clients.
Idyllic views A SMALL hotel on a 586-metre peak surrounded by the Aitana, Serella and Xorta sierras with views of Guadalest and Altea Bay was voted the world’s second-most romantic hotel.  Only the Narrows Escape Rainforest Retreat in Montville (Australia) was considered more idyllic in Tripadvisor’s Travellers Choice 2021 poll.
No tolls ALL parties on Denia council, including the PSPV socialists, voted in favour of a Compromis motion insisting that the AP-7 motorway should remain toll-free, despite the central government’s announcement that charges could eventually be re-introduced in line with EU requirements.  “We have already suffered enough,” councillors agreed.
Rocky shore COASTAL authority Costas gave permission for volunteers to remove accumulated stones by hand from the waterline at Moraira’s Ampolla beach this weekend, June 5 and 6.  These were brought in by heavy seas during the spring storms and are currently preventing safe access to the water for bathers.
Not fair  MONICA OLTRA, the regional government’s vice-president, lamented the UK’s decision not to include Spain on its green list for travellers. She announced that negotiations would continue since individual regions like Valencia, which has Spain’s lowest Covid-incidence rate, deserved to be evaluated on their own figures and not Spain’s.
House query SIXTY-TWO Campello residents lodged a complaint with the town hall complaining that a half-built villa on the Muchavista beach was unauthorised and the promoter lacked planning permission for a project of that size.  The property’s licence was still being processed, owing to “various irregularities” the Urban Development department explained.
Roman remains BENIDORM town hall will give the remains of a small Roman fort in El Tossal in La Cala “maximum protection” that will complement its future designation as a Site of Cutlural Interest (BIC).
More fish THE regional government gave permission to extend the fish farm off Calpe, increasing production to an annual 3,000 tons of bream and sea bass despite opposition from residents, owing to the visual impact.
Star role ELEVEN of the films that feature in the Malaga Film Festival were produced, directed or shot in the Valencian Community. The Cover, which opens the Festival on June 4 and was filmed principally in Benidorm, is a musical that focuses on the entertainers, tribute acts and musicians who provide nightly entertainment in the local hotels.

The Euro Weekly News is running a campaign to help reunite residents in Spain with family and friends by capping the cost of PCR tests for travel. Please help us to urge the UK government to cap the cost.