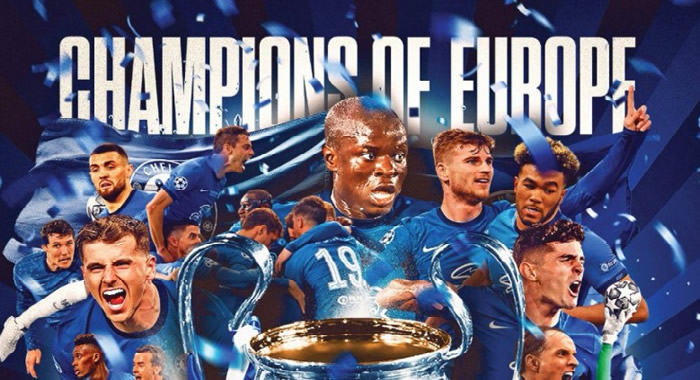 Tonight, Saturday, May 29, saw the culmination of Europe’s biggest club football competition, the UEFA Champion’s League, being played at Porto’s Estadio do Dragao, in front of 12,000 fans, with an all-English Champions League final between Chelsea and Manchester City, the 167th time the two clubs had met in all competitions, and a single goal saw Chelsea crowned champions of Europe.

The usual cat-and-mouse start to these finals was done away with as both teams went for it, with plenty of lively action, but no real attempts on goal, and it was a huge blow to Thomas Tuchel when Thiago Silva had to limp off after 39 minutes, to be replaced by Christensen.

Then on 42 minutes, Chelsea’s most expensive signing, the 21-year-old Kai Havertz struck a killer blow as he latched onto Mason Mount’s pass, and rounded City’s advancing Ederson to calmly slot the ball into an empty net, to give Chelsea a 1-0 lead at the break.

Pep Guardiola tweaked his team 10 minutes into the second half, but a nasty collision between Kevin Debruyne and Rudiger saw the Belgian leave the field after a long delay, taking away City’s creative influence in the middle of the park, with Gabriel Jesus coming on to replace him.

Incredibly, Man City could muster only one shot on target in the whole match, and even the introduction of their record goalscorer, Sergio Aguero, in his final game for the club, could not change the outcome.

It must be said that the second half was a pretty dreary affair, and considering City’s need to equalise, and the amount of talent available on the pitch, they were frighteningly unable to conjure up anything dangerous to worry the Chelsea defence, and as a result, Manchester City’s quest for Champion’s League glory continues, and Chelsea win the UEFA Champion’s League for the third time.