Thousands All Over Spain Demonstrate Against Proposed Cuts In State Pensions 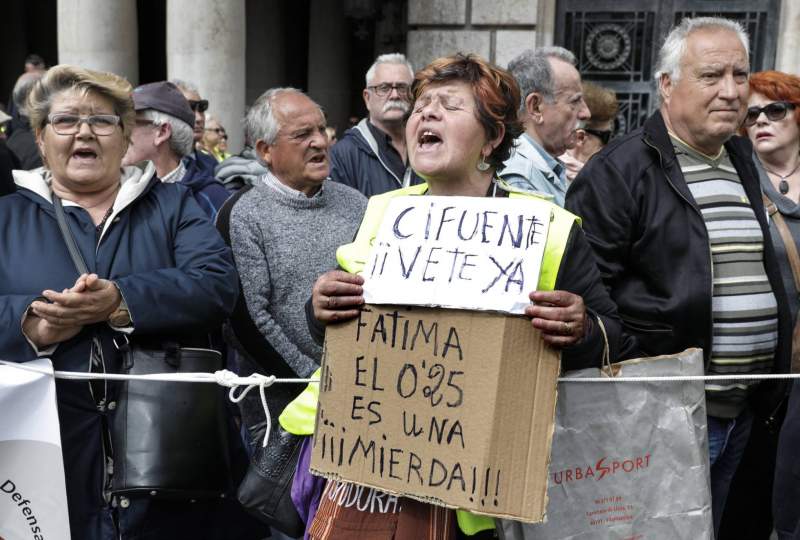 Thousands All Over Spain Demonstrate Against Proposed Cuts In State Pensions. image: Twitter

Thousands All Over Spain Demonstrate Against Proposed Cuts In State Pensions.

Thousands of people demonstrated this Saturday, May 29, in several Spanish cities to defend the public pension system and also to protest against the cuts that they say are being prepared by the Minister of Inclusion, Social Security and Migration, José Luis Escrivá.

The protests started on Monday when hundreds of pensioners gathered in the Plaza del Ayuntamiento de València “for the future of decent public pensions” and their revaluation equal to or above the CPI and against their possible privatization.

They described the measures announced in the General State Budgets as “shameful and insufficient” in relation to a rise of up to 3% for the lowest pensions. The rallies were called by the State Coordinator and the Valencian Coordinator for the Defense of the Public Pension System and took place simultaneously across 16 Valencian towns.

In Madrid, around a thousand people gathered in a demonstration that took place between Puerta del Sol and the Congress of Deputies. The participants chanted slogans against the Government and they have set out their principles, as their header banner stated: “In defense of the public pension system- NO to the Toledo Pact.”

In Barcelona, at least a thousand people, according to the Guardia Urbana, gathered at the headquarters of the Government Delegation in Catalonia, also in defense of the public pension system.

The event, convened by the Marea Pensionista de Cataluña, started in Urquinaona Square in the Catalan capital with the slogan “In defense of the public pension system. NO cuts or privatizations”, and was a peaceful demonstration through the main streets of the city to the headquarters of the Government Delegation.

Ramon Franquesa, the spokesman for the group, reported that the protesters have demanded that the public nature of the pension system be maintained and that no agreement be made on any sort of privatisation.

Franquesa explained that the protesters have demanded that it be clarified if the agreement reached this week between the Government and social security bosses, mentioned yesterday by the Minister of Inclusion and Social Security, José Luis Escrivá, implies the privatisation of pensions.

“We do not want private pension funds to be created with this or any other agreement,” Franquesa has stressed, who has also asked the Court of Accounts to audit the Social Security treasury since its creation in 1963.

Thousands of pensioners, called upon by the Movement of Pensioners of Euskal Herria, also demonstrated in the three Basque capitals, Pamplona, and various municipalities in the Basque Country and Navarra.

The largest of the marches were seen in Bilbao, where several thousand people participated, the vast majority were pensioners but also included trade unionists, members of social groups and workers of companies who are in crisis.

In addition to the capital of Biscay, demonstrations were held in Vitoria, San Sebastián and Pamplona, while on Saturday morning they were held in towns such as Ondarroa, Lekeitio, Eibar and Alsasua.

The Bilbao demonstration was led by a banner calling for “Worthy pensions of 1,080 euros/month”.

The spokesman for the Bizkaia Pensioners’ Movement, Jon Fano, has harshly criticised, in statements to the press, the UGT unions and Workers’ Commissions for negotiating with the Government of Spain and the employers’ CEOE and Cepyme the pension reform.

In his opinion, “the Government with the employers, UGT and Commissions will soon close agreements on pensions that will entail significant cuts, not so much for pensioners now as for future generations.”