Malaga Baker Bakes The World’s Most Expensive Loaf Of Bread 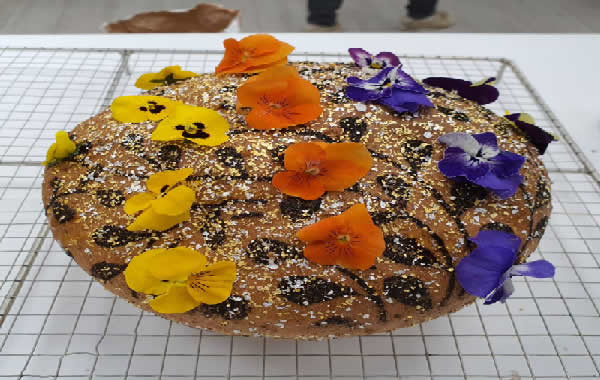 Malaga Baker Juan Manuel Moreno Has Baked The World’s Most Expensive Loaf Of Bread valued at €10,000 for one kilo

Juan Manuel Moreno is a baker from Malaga, on the Costa del Sol in Spain, but he is not just any old baker, Juan bakes some of the most expensive bread loves in the world – gold-priced bread.

This Monday he will exhibit his latest loaf in Madrid Fusión – the world’s leading gastronomy fair – a loaf weighing one kilo, and it is valued at €10,000 (£8,600), the most expensive bread in the world, with the last loaf of gold being sold for €1,450.

According to Fran Moreno, Juan’s son, his father bakes the unique bread using tough flour from the Malaga municipality of Ronda, along with other ingredients that include gold, and silver, at the small family bakery that they run with Juan’s wife, Manuela Piña, in the typically rural Spanish town of Algatocín, which has just 700 inhabitants, located in the idyllic setting of the Serranía de Ronda.

Juan’s family founded their bakery back in 1940, and he placed them well and truly on the map of Haute Gastronomy when he started baking gold-priced bread in 2017, saying, “My parents wanted to keep open a bakery, inherited from my grandparents, something very difficult to achieve in a town that was running out of space”, as reported by cadenaser.com.

Some of the best ideas in history are known to have happened purely by chance, and Juan’s success story is no different, as he explains that his idea came to him after “a coffee seller told my father what some Russians were paying for this product, and it is in Russia, in the Arab countries, and in China, where we have our biggest clients”.