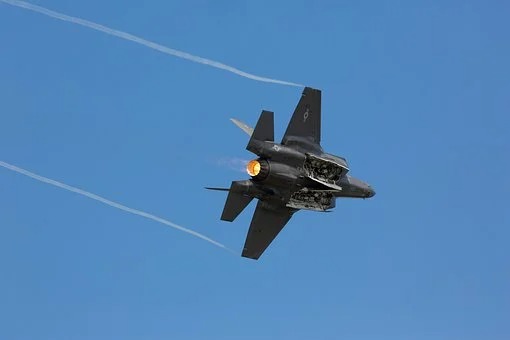 HELICOPTER pilot reports near miss with four fighter jets in the airspace over Norwich.

According to Airprox the helicopter pilot who was flying an AW139 helicopter was alerted by air traffic control that “intense military activity” was taking place in the “vicinity” of his helicopter. The helicopter had been flying over Norwich on February 24 when the “near miss” occurred. The fighter jet pilots had been part of a qualified flying instructor course.

The four fighter jets were F-35s jets and had been flying in formation when they came close to the helicopter during the course. The vertical distance recorded between the helicopter and one of the jets came in at a staggeringly close 183 metres at one point.

Once the helicopter pilot had been warned that the jets were in the vicinity the pilot was able to spot three of the four jets that were in the air.

According to Airprox the helicopter pilot “could not predict the F-35 pilots’ intentions and so elected to maintain course and altitude initially”. The helicopter then started to descend “when the conflicting flight paths became apparent”.

Airprox went on to explain that the crew ought to be “commended” for their “proactive actions to help reduce the risk of a collision”.

At the time of the “near miss” the helicopter had been under Norwich air traffic control and the fighter jets were under the control of Marham. Due to the incident all F-35 operators will now need to read the Airprox report “as a case study to help improve awareness of the important of lookout as much as the continued need to follow good airmanship practice”.

The level of supervision to controllers is also set to be augmented when they are busy to improve safety.