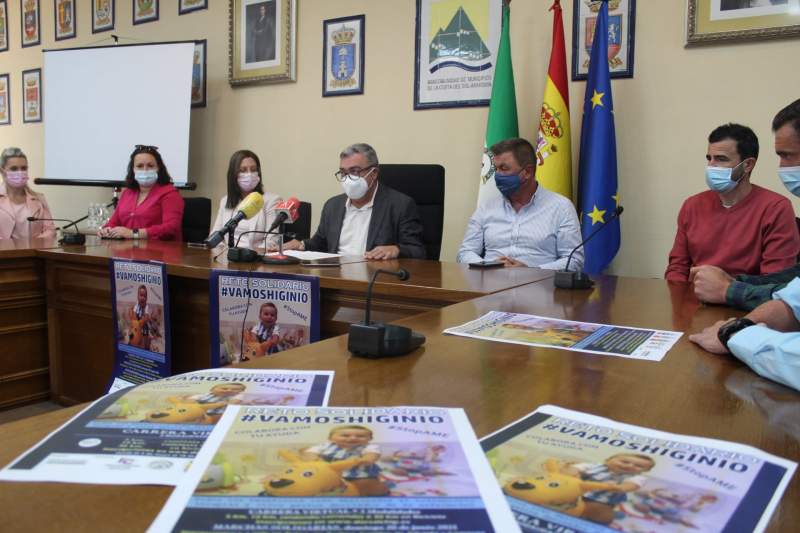 A group of people have launched this initiative to help financially the parents of a two-year-old boy from Canillas de Albaida who suffers from spinal muscular atrophy.

The president of the Association of Municipalities of the Costa del Sol Axarquía, José Juan Jiménez, the mayor of Canillas de Albaida, Jorge Martín, the mayor of Archez, Mari Carmen Moreno, the deputy mayor of Cómpeta, Rosa Luz Fernández, and the councillor of Social Services, María López, have accompanied the organising team of the “Vamos Higinio Solidarity Challenge”.
The initiative was formed by Isidro Ortega, Serafín Pérez, Marcial Navas and Rubén Ariza, to present an initiative in which they intend to involve all the people of Malaga with the aim of contributing financially to Higinio’s family in order to alleviate the expenses generated by the spinal muscular atrophy suffered by the two-year-old boy born in Canillas de Albaida.
Higinioturned two years old on May 27. Around five months after his birth, he was diagnosed with spinal muscular atrophy, a neurogenerative disease that leaves your muscles unable to develop and causes loss of strength, reports Axarquia Plus.
Among the weekly expenses that the family has to face including physical therapy or speech therapy sessions, they have also had to purchase special walkers, a special high chair to maintain posture, a wheelchair and even an adapted car to be able to take him to medical consultations and treatments.
“First of all, I want to thank this group of supportive people, because I know that there are many more people behind them, who have been working hard for two months to help this Axarquia family that is going through some hard times.”
We trust the doctors who are the ones who look after the health of the minor, but we can lend a hand trying to reduce the high costs that parents have to bear in services or furniture,” Jiménez expressed, who has encouraged “all the people of Malaga and from Malaga to participate in the “Let’s Go Higinio Solidarity Challenge”.
Isidro Ortega explained that they have started the second phase of this initiative with which they intend to raise funds to cover the family’s expenses. This consists of a virtual race “in which you can participate from anywhere and at any time.”
“Registration costs five euros and there are three ways to do it. They are symbolic, but we have established them as an incentive to attract sports people ”, the organiser has said. Participants can do the five-kilometre run or walk; the 10 kilometres one or the 30 kilometres one.
“We also offer the possibility of making a donation by adding it to the registration. We are doing it through the specialised platform www.dorsalship.com and we already have 800 people registered. They have told us that never in so few days have they added so many. That encourages the team,” Ortega celebrated, who indicated that they can learn more about the initiative through Facebook and Instagram challengesolidariovamoshiginio. The virtual race will be open until June 19.
Navas has reported that “thanks to the involvement of the municipalities of Canillas de Albaida, Archez and Competa that will be in charge of channelling the registrations”, a solidarity march will be organised for next Sunday, June 20 .
“The exits will be from each of these towns, controlling the capacity. It is intended for all types of people, you can go as a family or even with a pet; and after the solidarity march we will do sports activities”, this member of the organising team has specified, who has indicated that there will also be solidarity shirts available for sale.
On June 20 there will be a solidarity challenge starting from Archez to Canillas de Albaida with a climb to Lucero and back through Competa. “It is a hard 30-kilometre route to which we are going to invite all Malaga clubs to choose a representative,” Perez reported.