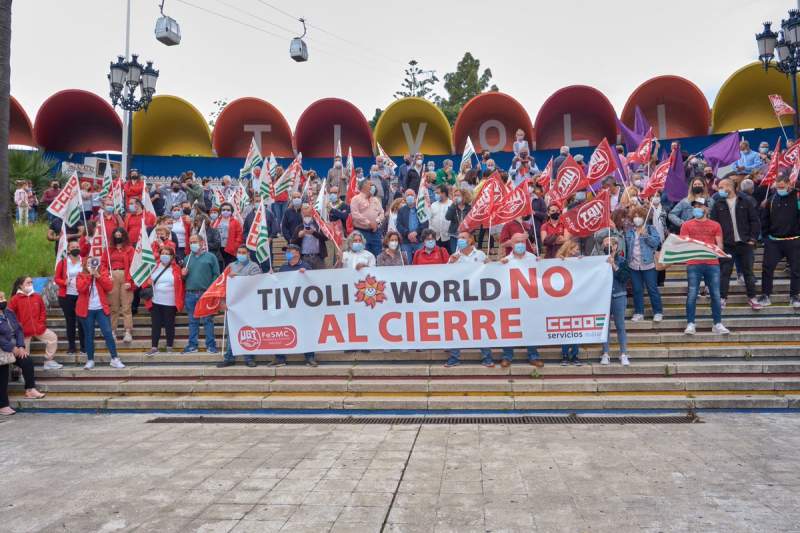 TIVOLI workers protest in Costa Del Sol in hope of a summer opening. The workers of the Tivoli World amusement park, located in Benalmadena, have held a protest march this morning, June 3, to ask for the opening of the recreational space this summer, in which a hundred people have travelled to various points of the Costa del Sol to claim the continuity of the emblematic leisure centre, as highlighted by Lola Villalba, Secretary of Services of the Comisiones Obreras (CCOO) union in Malaga.
The route of the first day of the march started this Thursday, June 3, at 08.30 hours from the Benalmádena Marina, and has run along the promenade until arriving at Los Álamos de Torremolinos around 12.30, which has been convened by the CCOO and UGT unions.
As reported by Malaga Hoy, Villalba stressed that “we remain very concerned” about the situation that the Tívoli amusement park is going through, lamenting that “the commitment made by the Junta de Andalucia with the unions and with the Benalmadena City Council to create a dialogue has not yet been possible” despite the “attempts” of the local Administration.
She continued “We are afraid that they are going to give us long and this dialogue table will not be created,” the union member has valued, who has remarked that “it is necessary and essential that the company that owns Tivoli, Tremón, and the administrations, together with the social part, sit down together and try to reach an agreement for the park to open.
It is estimated that “if that were not the case,” that is, that “this year the recreational and leisure space would not be opened,” “the future possibilities for the park and the workers would be almost non-existent,” which is why a call to the public administrations has been made especially regarding the Junta de Andalucia and Tremón, so that “they come to an agreement.” Villalba has highlighted the “sensitivity within the law” of the bankruptcy administrator so that “workers do not lose their job and the destination Costa del Sol does not lose something as important as Tivoli World.”
The second protest day will take place tomorrow, Friday, June 4, with the departure from the Ikea parking lot at 08.30am to the Government Sub-delegation of the Junta in Malaga, to request the opening of the park this summer.