Works Of The Coastal Path On Calahonda Beach Are Completed 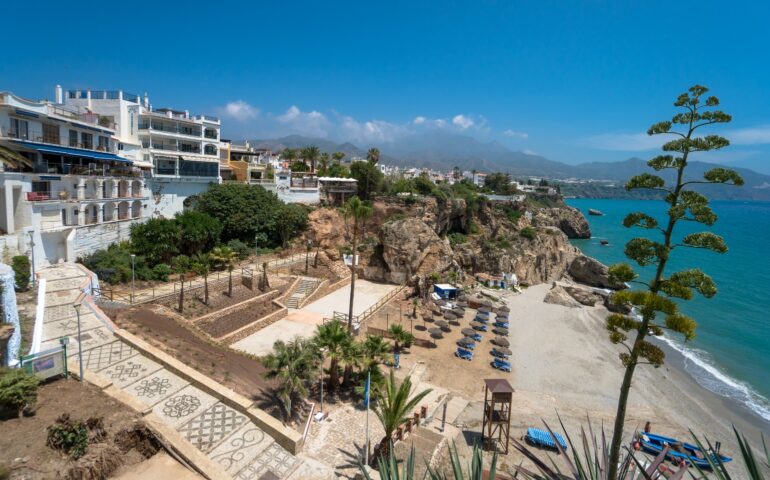 WORKS on the coastal path and viewpoints of Calahonda beach in Nerja are now complete ahead of the summer season.

The mayor of Nerja, José Alberto Armijo, highlighted the promotion of the Senda Litoral projects in the municipality during his visit to Calahonda beach yesterday, June 2, where the works corresponding to phases 1.1 and 1.2 of the Paseo de los Carabineros project belonging to the Senda Litoral have been completed. “Predictably tomorrow this renovated beach and the two panoramic viewpoints that have been built at the beginning of the Paseo de los Carabineros will open to the public, thus taking a first step in the opening of this important tourist infrastructure.”
The councillor, who was accompanied by the Head of the Infrastructure Service, Antonio Dorado, the Councillor for Urban Planning, Nieves Atencia, the Councillor for Beaches, María del Carmen López, and the Manager of Aguas de Narixa, Juan Ángel Poyatos, along with the manager of the company Actüa Infraestructuras, Mauricio Delgado, and the project manager, Pedro Gozalo, have shown their satisfaction for the works on the beach.
The new infrastructures were built with coordinated work between the Councils of Infrastructures, Urbanism and Beaches. “Our neighbours and visitors will be able to enjoy an expanded beach, thanks to the new location of the hammocks, which has landscaping and a new access”.
Finally, José Alberto Armijo reiterated his gratitude to the Malaga Provincial Council, which has financed the project in its entirety, valued at 313,837.67 euros, for which he stressed that “the City Council will continue to work hand in hand with the provincial entity in the Senda Litoral projects in our municipality with the commitment to continue improving the attractiveness of our tourist infrastructures aimed at consolidating the municipality as a benchmark and quality destination on the Eastern Costa del Sol”.