Ryanair And easyJet Condemn Moving Portugal From Green To Amber 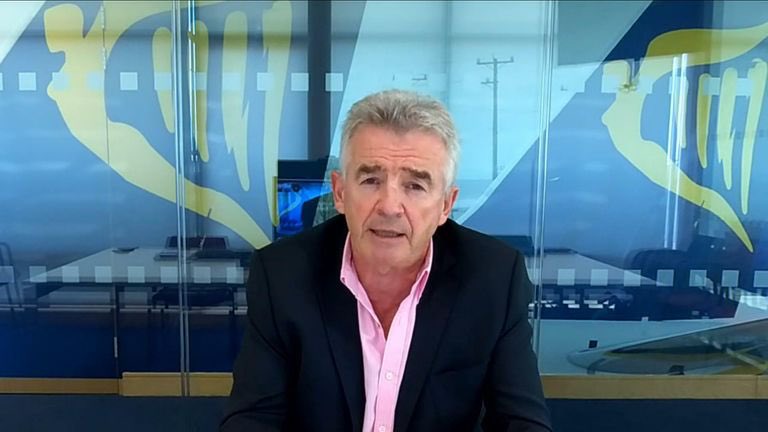 Ryanair and easyJet have condemned the UK Government for moving Portugal from green to amber list.

“The decision has no basis in science or public health” and is evidence that Boris Johnson’s government “makes it up as they go along,” said Ryanair chief Michael O’Leary.

easyJet said in a statement the decision “makes no sense”. Both companies saw their share price tumble after the announcement on June 3.

“Boris Johnson’s government is again mismanaging the Covid recovery. This stop-go-stop approach to short haul travel in Europe is inexplicable and unjustified when 75 per cent of the UK population has now received a Covid vaccine. There is no medical or public health reason for moving Portugal from the Green to the Amber List, when its Covid case rates are as low as the UK at just 50 per 100,000 population, and Portugal’s vaccine rollout programme has exceeded 40 per cent and is rapidly catching up with UK levels,” O’Leary said.

“UK citizens who have already booked travel to Portugal deserve an explanation why vaccinated UK citizens are required to quarantine when returning from a country which has similarly low Covid case rates as the UK. Transport Minister Shapps should also explain why those countries such as Malta, or Islands such as the Balearics and the Canaries, who have significantly lower Covid case rates than the UK, have not been added to the UK green list to allow UK families a well-earned holiday in June, July and August, particularly when those UK families have already been vaccinated.

“This is sadly further evidence that the Johnson Government just makes it up as they go along, and this stop-go-stop approach to international travel is damaging for the UK and for millions of UK families. Ryanair calls today on Boris Johnson and Grant Shapps to immediately return Portugal to the Green List, and add those other low risk destinations such as Malta, the Balearics and the Canary Islands, so that British families can plan their holidays for Summer 2021 without being repeatedly disrupted and mismanaged by Boris Johnson and his chaotic Government Administration,” he added.

easyJet also said the decision had no scientific basis.

“With Portuguese rates similar to those in the UK it simply isn’t justified by the science. And to add no more countries to the Green list when most of Europe’s infection rates are on a downward trend and many places with low infection rates below that of the UK, such as the Balearics with a current rate of 33 in 100,000 and Malta, with just 12 in 100,000, this makes no sense. Especially when domestic travel is allowed within the UK, despite a number of cities having infection rates 20 times greater than much of Europe,” said Johan Lundgren, the CEO of easyJet.

“When this framework was put together, consumers were promised a waiting list to allow them to plan. Yet the government has torn up its own rule book and ignored the science, throwing peoples’ plans into chaos, with virtually no notice or alternative options for travel from the UK. This decision essentially cuts the UK off from the rest of the world.

“We have demonstrated that a safe reopening of travel is possible as our study with leading epidemiologists from the Yale School of Public Health showed that the criteria which matters most is the impact on hospitalisation rates back in the UK, not the infection rates in destination. Reopening travel to much of Europe would have a negligible impact on hospitalisation rates in the UK.  While our European fleet is gearing up for summer as European governments open up travel for their citizens, the UK government is making it impossible for airlines to plan while consumers are left grounded in the UK,” he added.

Ryanair also condemned Transport Minister Grant Shapps failure to add other destinations to the UK green list, such as Malta, which has now overtaken the UK with almost 80 per cent of its population receiving a Covid vaccine, and Covid case rates in Malta are just 12 per 100,000 population, less than 25 per cent of the rate in the UK.

The budget airline called for other Islands, such as the Balearics and the Canaries, to be immediately added to the UK Green List, when their Covid case rates are running at approximately 30 per 100,000, considerably lower than UK Covid case rates.