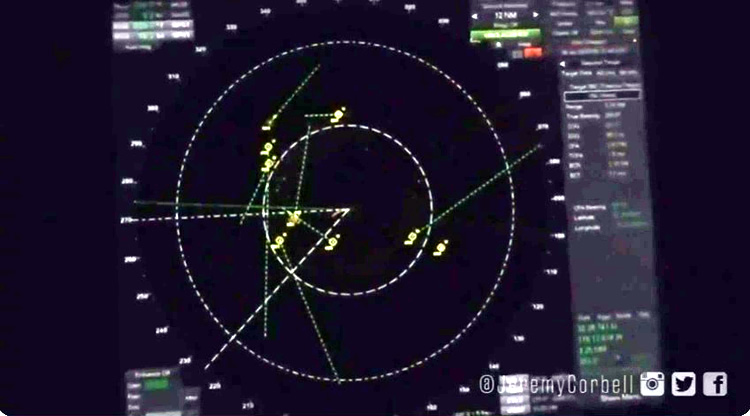 Pentagon Confirms That 14 UFOs Surrounded A Warship In California Waters

According to Gadi Schwartz, a correspondent for NBC News, his source inside the Pentagon, has confirmed that video footage belonging to the researcher Jeremy Corbell, that shows a group of 14 UFOs surrounding a US warship off the coast of California, is real.

Jeremy Corbell’s video footage in question was taken from a radar on the command bridge of the USS Omaha, on July 15, 2019, and in which you can see how 14 objects that move at high speed surround a US Navy warship, according to lasprovincias.es.

When Corbell uploaded the video onto social media, he wrote alongside the images, “In 2019, US Navy warships were surrounded by UFOs, here is the video showing the RADAR confirming it. It was recorded at the USS Omaha Combat and Information Center on July 15, 2019. This is an elector-optical corroboration that demonstrates a significant series of UFO events in the San Diego area”.

NBC News correspondent, Gadi Schwartz, through his Twitter account has reported that the United States Government considers the images real, saying, “I can confirm that the video that Jeremy Corbell sent was taken by Navy personnel and that the UAPTF (United States Office of Naval Intelligence Unidentified Aerial Phenomena Task Force) included it in their ongoing investigations. I have no more information about it”.

Experts quoted by the British newspaper, The Independent, have pointed out that these objects move too fast to be drones, “If they are drones, they show capabilities that are beyond our own technologies”, they exclaimed.

2019 US Navy warships were swarmed by UFOs; here's the RADAR footage that shows that. Filmed in the Combat Information Center of the USS Omaha / July 15th 2019 / this is corroborative electro-optic data demonstrating a significant UFO event series in a warning area off San Diego. pic.twitter.com/bZS5wbLuLl

Just in from Pentagon spokesperson: “I can confirm that the video you sent was taken by Navy personnel, and that the UAPTF included it in their ongoing examinations.  I have no further information on it for you.” https://t.co/ayPVnckG8J