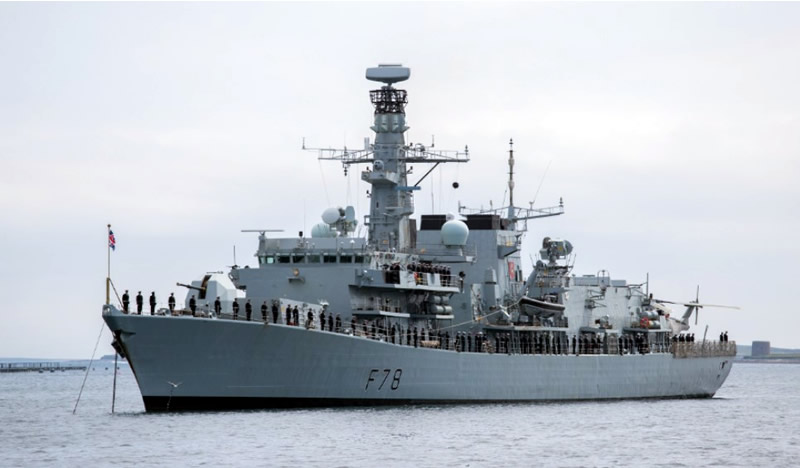 British Navy frigate HMS Kent docked into Alicante port on Friday 4, where it will spend one week, in a historic first visit to any Spanish port by a ship from the Queen Elizabeth Combat Group.
HMS Kent is currently temporarily integrated into the Permanent Naval Group 2 of NATO, which is under Spanish command right now, and in fact, she is docked alongside Spain’s Méndez Núñez, with the British vessel being welcomed to Spain by Hugh Elliott, the British Ambassador to Spain.
Frigate Captain Matt Sykes explained, “We have had a very good week with the Spanish Navy, working as part of the NATO naval forces, we have participated in the ‘Steadfast Defender’ manoeuvres, which are the most important in NATO this year, and we have done some manoeuvres nearby from the Spanish coast with the helicopter that we carry on board and fighters of the Spanish Air Force”.
A Duke Type 23 class frigate, HMS Kent was launched on May 27, 1998, by Princess Alexandra of Kent, and entered Royal Navy service on June 8, 2001, carrying 220 sailors, both male, and female, divided into four main departments: armaments, logistics, weapons engineering and marine engineering, along with an organic flight team, and a boarding team from the Royal Navy.
This ship, one of the most modern in the Royal Navy, specialising in anti-submarine fighting, will return to the Queen Elizabeth Combat Group in mid-June, but right now, along with the frigate Méndez Nuñéz, it is a centrepiece of the port, and had both ships had a visit today (Sunday 6) by Luis Barcala, the mayor of Alicante, who has reportedly pledged to illuminate the Castle of Santa Bárbara that overlooks the port, with the colors of the Spanish flag in honour of the Spanish frigate.