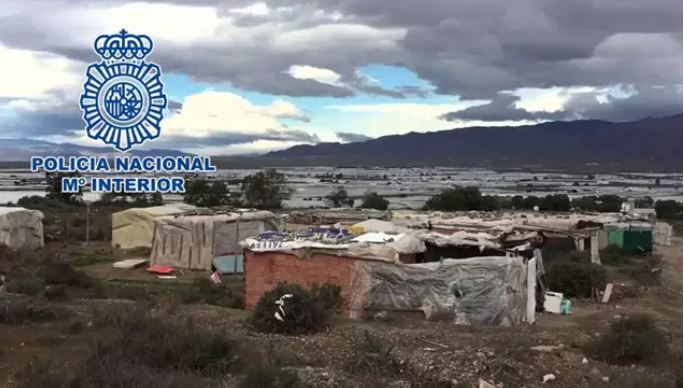 National Police have been able to arrest a man involved in a shocking slum extortion racket.

A man was arrested in Almeria’s El Ejido, and it is believed that he had been extorting money from undocumented immigrants. He had been renting out slum housing and had also threatened them.

Almeria’s National Police have arrested the man in the town of El Ejido, and is alleged that he had exploited undocumented migrants when he rented out slum -like accommodation in a shantytown. It also alleged that he threatened them, destroyed their belongings and cut off the electricity when they could not pay their rent.

According to police sources as reported by Europa press, the man who has been detained has been investigated for an alleged series of crimes involving serious coercion and a crime against the rights of foreign citizens.

The operation began early on in 2021 and is named Operation Kenitra. The operation began to take place when investigators from the police station in El Ejido found that the shantytown’s population in Paraje de la Cumbre-Paraje Las Chozas was increasing.

They went on to discover that multiple people were living in the slums in substandard conditions with extremely poor sanitary conditions. The dwellings were said to be six metres square and most of the men found were of Moroccan origin aged between 20 and 35 years old.

National Police have now been able to arrest a Moroccan citizen who is believed to have benefited from the misery of his compatriots. Not only had he charged them to transport them to the shantytown but he had also charged them 60 euros each month to live in the slums. When they could not pay their rent it is alleged that he threatened them, cut off electricity and also destroyed their houses.